Also in this issue:

After 10 years, Rastafarian inmate gets haircut

Alleged terrorist wants to be judged by the Qur’an, not Canada’s criminal code

Nadine Brown, founder of controversial Intercessors of the Lamb, dies 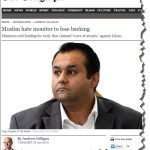 Tell Mama, a project that claims it monitors anti-Muslim attacks (‘Mama’ stands for ‘Measuring Anti Muslim Attacks’), will not have its Â£214,000 a year government grant renewed after police and civil servants raised concerns about its methods.

After the horrific May 22nd murder of Lee Rigby in Woolwich by two Muslim fanatics, the project’s founder, Fiyah Mughal, recently reported “a wave of attacks, harassment, and hate-filled speech against Muslims €¦ an unprecedented number of incidents.”

Tell Mama confirmed to The Sunday Telegraph that about 120 of its 212 “anti-Muslim incidents” — 57 per cent — took place only online. They were offensive postings on Twitter or Facebook, or comments on blogs: nasty and undesirable, certainly, but some way from violence or physical harm and often, indeed, legal. Not all the offending tweets and postings, it turns out, even originated in Britain.

A further 16 per cent of the 212 reports had not been verified, and only 17 of the 212 incidents, 8 per cent, involved the physical targeting of people.

Now the paper reveals that even before the Woolwich murder Mughal was told that his project would lose government funding from the Department for Communities and Local Government (DCLG).

Tell Mama has posted responses to The Telegraph at its website.

“Mr Mughal was giving data on attacks to DCLG which wasn’t stacking up when it was cross-referenced with other reports by Acpo [the Association of Chief Police Officers],” said one source closely involved in counter-extremism.

Last March the BBC reported that

The Tell Mama project wants to carry the same weight as the Community Safety Trust (CST), which has for almost 30 years been recording incidents of anti-Semitism in the UK. 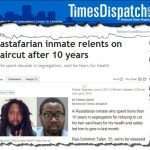 Ras-Solomon Tafari, a Rastafarian inmate who spent more than 10 years in segregation for refusing to cut his hair, has now complied with Virginia prison grooming policies out of concern for his health and safety.

so he could be transferred from Wallens Ridge State Prison, where he was beaten last year and suffered a stroke and other injuries. […]

Tafari and a handful of other Rastafarian inmates had long opposed the Virginia Department of Corrections grooming policy, claiming it was against their religion.

The paper notes that Tafari — sentenced to 20 years in 1996 for possession of cocaine, and scheduled for release in October, 2014 — was among a handful of other Rastafarian inmates who had long opposed the Virginia Department of Corrections grooming policy, claiming it was against their religion.

Alleged terrorist wants to be judged by the Qur’an, not the criminal code 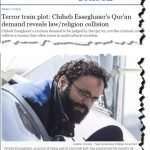 In Canada, a Muslim accused of being part of a terrorist plot, has not had much luck finding a lawywer to represent him at his trial.

Big part of the problem is that Tunesian national Chiheb Essenhaier, co-accused in an alleged plot to derail a Toronto-bound passenger train, insists he needs to be judged by the Qur’an, not the Criminal Code.

That’s a ridiculous notion. In 2005 Ontario rejected the use of Shariah law in private arbitration, and with good reason.

In the civilized Western world, there has to be one law for all — and it’s not going to be Islamic law — a law which leads to human rights violations around the world.

“We are very disturbed by (Esseghaier’s), I would say, unreasonable demand,” said Tahir Gora, director general of Progressive Muslims Institute Canada. “He (places) no value (on) civil and liberal democratic rights, and (yet) he was enjoying those rights.”

Nadine Brown, founder of controversial Intercessors of the Lamb, dies 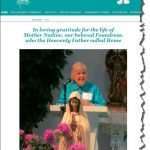 The formerly cloistered nun, who founded the group in the 1980s, has died at the age of 83.

In October, 2010 Intercessors of the Lamb lost its affiliation with the Roman Catholic Church after an investigation revealed “questionable financial practices, disunity and widespread dissatisfaction with the group’s leaders, who reportedly used intimidation tactics to recruit new members.”

At the time, the Church warned the 3,000 Catholics who followed her to disregard Brown’s teachings and to stop funding her group.

Members who joined the group at its compound in the Ponca Hills north of Omaha gave up their families, jobs and possessions to live in poverty and pray for man’s sins.