You are here: Home | Church and State | Religious Intolerance in Islamic Indonesia

Correlation between countries’ religiosity and attitudes toward homosexuality

Religious intolerance in law and in practice in Islamic Indonesia

The Louisiana legislature has passed a bill, HB 724, that affirms the right of students to hold prayer meetings in the state’s public schools.

The folks at Americans United for Separation of Church and State are upset about it.

Report: Correlation between countries’ religiosity and attitudes toward homosexuality

In a report titled The Global Divide on Homosexuality the Pew Research Center concludes there is a strong relationship between a country’s religiosity and opinions about homosexuality.

Former Manson Family member Leslie van Houten, who was 17 when she participated in the cult’s killing of Los Angeles grocers Leno and Rosemary La Bianca, has again been denied parole.

Excerpt of a 1991 Court TV documentary about Leslie van Houten

At her 20th parole hearing the former homecoming princess went into details about her involvement in the 1969 murders. She said she had felt left out when Manson’s followers killed actress Sharon Tate and four others people the night before, and volunteered to go along for the La Bianca murders.

Van Houten’s attorney argued that, during her 44 years in prison, his client has totally reformed herself. None of Manson’s former followers have succeeded in their bids for parole. Manson himself wants to remain in prision, saying it is his home. 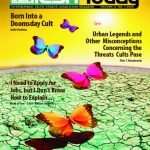 A new issue of ICSA Today (Vol. 4, No. 1), has been made available to supporting members of the International Cultic Studies Association (ICSA).

Among other things this issue includes and article titled, Misconceptions Concerning the Threats Cults Pose, by Piotr T. Nowakowski; Results of the 2008 ICSA Questionnaire for Former
Cult Members; and the personal story of a woman born into a doomsday cult.1

ICSA Today provides “information that enhances understanding of all aspects of the cult phenomenon, including how groups function, how they affect members, techniques of influence, dealing with harmful effects, educational and legal implications, and other subjects.”

ICSA is the world’s largest secular cult-information organization, and the primary network of lay and professional cult experts.

We encourage those interested in all aspects of cult-related issues — as well as people who need the services of a cult expert — to contact and support ICSA.

The beach fashion section of this year’s Miss World competition will have something missing: the organization has banned bikinis in favor of more conservative outfits. 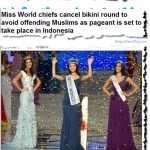 The contest is being held on the Indonesian resort island of Bali, where the beaches are packed with tourists sunbathing in skimpy swimwear.

The Asia Sentinel points out that “Bali is a Hindu island surrounded on all sides by a Muslim sea, its traditions are considerably more relaxed than the rest of Indonesian culture.”

But with 200 million Muslims Indonesia is a predominantly Islamic country, and the Miss World Organization issued its edict after Muslim hardliners — including Jakarta Governor Joko Widodo — threatened protests and mass demonstrations.

An editiorial in the Jakarta Post says it is natural that some people “want to stick to their strict beliefs, customs and traditions,” but “that does not mean hardline groups have the right to ban the bikini session.”

Religious intolerance in law and in practice in Islamic Indonesia.

According to Human Rights Watch

Indonesia has in recent years made meaningful progress toward strengthening democracy and respect for human rights. Those gains, along with perceptions of Indonesia as a bulwark of a progressive, moderate Islam, have prompted international praise of Indonesia as a model Islamic democracy.

But the organization also documents an ever-growing increase in attacks on religious minorities — the vast majority of them by Islamic militants who are guilty of crimes ranging from intimidation to physical violence.

HRW says that at times these extremist Muslims have acted with the tacit, or occasionally open, support of government officials and police.

If Indonesia is to retain its reputation for religious diversity and tolerance, immediate action is needed, the organization says.

The American Spectator provides a good overview of the report’s major point.

More items may be added throughout the day.

Get our Religion News Headlines delivered straight to your mailbox.