Herbert and Catherine Schaible, charged with third-degree murder in the faith healing death of their 8-month old son, are in custody at least until a bail hearing later on today.

Update: The Schaibles have had their bail revoked.

He says they’re a flight risk because there could be a community of like-minded people around the world who might harbor them.

The couple turned themselves in on Wednesday. Originally they were held without bail, but after the defense objected, at 2:00 am on Thursday a judge set bail was set at $250,000.

According to the Associated Press defense lawyer Bobby Hoof

will ask a judge Friday to lower the bail, noting that the Schaibles are “of humble means” and have never missed a court date. He said his client was expecting to be charged after Brandon’s death and surrendered willingly.

“He’s not this monster that people are trying to paint him out to be,” Hoof said Thursday.

Catherine Schaible’s public defender, Mythri Jayaraman, has said Brandon saw a doctor at least once for a checkup when he was 10 days old.

“She’s still dealing with a tremendous amount of grief,” Jayaraman said this week.

lodge a detainer against the Schaibles, which would keep the couple jailed until their violation probation is eventually addressed by a court. […]

The third-degree murder in Brandon’s death carries a maximum sentence of 20 to 40 years.

On the probation violation in Kent’s death, the Schaibles potentially face a separate sentence of seven to 14 years.

The couple was still on probation for the negligence death of another child, in January 2009, when their 8-month old son Brandon died last month.

The Schaibles are members of the First Century Gospel Church in Northern Philadelphia — which teaches that “it is a definite sin to trust in medical help and pills” and claims that a person’s salvation depends on trusting God to heal without medical help or medicine. 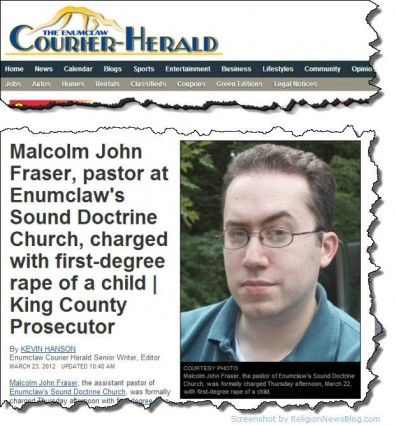 Closing statements in the near-two-month longÂ trial will be given on Tuesday, May 28, and jury deliberations will likely begin that same day.

Fraser, who entered a not guilty plea in April last year, is an assistant pastor of Sound Doctrine Church in Enumclaw, Washington. Theologically this tiny church is a cult of Christianity. Sociologically there is also cause for concern.

The church, which is quite active on the internet, is known for — among other things — its almost belligerent defensiveness.

But, as the Enumclaw Courier-Herald reiterates, “Neither the church nor the other church members are on trial.”

The paper says Fraser, who also worked at the church-owned WinePress Publishing in Enumclaw, did not take the stand to testify.

Earlier this week church member Kerry Williams, testifying as a witness for the defense, claimed, the church is not a cult.

She described Sound Doctrine as a small church, a close family group that, “honors God with our lives.”

She said the church has not been able to meet in the past year because “We’ve experienced a hate crime against our church from Athena Dean and articles published in the Courier-Herald.”

Athena Dean is a central figure in the defense case. Dean is a former Sound Doctrine member and former owner of WinePress Publishing. In opening statements Carey characterized Dean as someone who is angry with the church and friends with the young woman’s mother.

The young woman who brought the allegations testified Dean was a friend of her mother, but she had not discussed the case with Dean nor was close with her.

Kerry Williams testified Dean has caused trouble for the church members since she left in 2011.

“She’s turned our lives upside down,” Williams said. “We started getting a lot of people concerned who we were as a church.”

Dennis Box is the paper’s editor.