Israeli police have arrested a man whom they suspect of leading a violent cult community that routinely practiced child abuse. 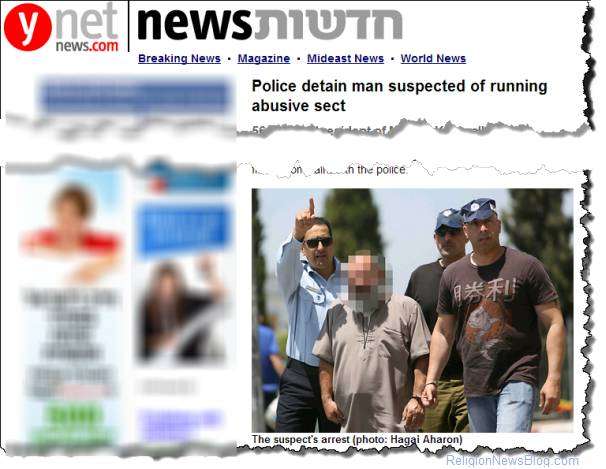 YNetnews reports the man is

suspected of having instilled a regime of terror within a sect of his own making, and subjecting minors and adults to endless acts of torture, humiliation and sexual abuse.

Six families, including 11 parents and 25 children, were allegedly victims to the violent whims of the dictatorial figure, who, among other things, ordered parents to lock their children in bathrooms for hours and smear their faces with feces.

The suspect is Munib Farhat (some reports say Munir Farhat), a 56-year old Arab resident of Majd al-Frum, a town located in the Upper Galilee in Israel’s North District.

On Tuesday a Nazareth court extended his remand for eight days.

Police says the cult operated for more than a decade.

Farhat was arrested several week ago, but news of the arrest was released on Tuesday.

According to Ynet the suspect referred to himself as “Khalifa,” a Muslim religious title, but the sect he created had no religious characteristics.

Besides abusing children, Farhat instructed husbands to beat their wives. Women in the cult were forced to donate their time to Farhat, including cleaning his house — and if he was dissatisfied, he would beat the victims and lock them up in a closet for days

Police said Farhat was also very involved in cult members’ personal lives, and he required them to reveal intimate details of their relationships, and of their finances. He also demanded that members turn over their salaries to him, and he distributed allowances to members. Cult members questioned by police said that Farhat tried to foster total dependence on him, and demanded that they loyally follow his every instruction.

Ynetnews says the investigation began last month after one of the women, 46, left the sect and filed a complaint with the police. Â

The woman told Ynet that

“at first we believed (Farhat) and thought he wanted to help us, but everything changed over the past few years. He attacked women and children; forced them to clean the house and cultivate the land without any compensation. Any woman who objected was attacked and locked in the shower or stockroom for more than seven hours.

“He brutally attacked me several times — stepped on my neck, hit me all over by body and locked me up in the stockroom with the mice. When I screamed he threatened to murder me. I did not seek medical care because I was afraid he would hurt me if he found out,” she recalled.
Â
The woman said that as soon as she left the cult and complained against Farhat, he turned her family against her. “My husband and three children are no longer in touch with me and believe that the cult leader’s way is the right one. I hope we will live together again — far away from this horrific story,” the woman said.

Israel’s Ministry of Welfare and Social Services has assigned social workers to the children.

In August 2001, Israeli police arrested nine members of an ultra-orthodox cult on suspicion of carrying out emotional and physical abuse of women and children over a two year period.

And in January 2010 a cult leader from south Tel Aviv was arrested on suspicion of “enslaving” members of his group and raping a number of the women.

If you are in Israel and need help, contact the Israel Center for Cult Victims