Last year, Kong Hee, founder and pastor of one of Singapore’s richest churches was charged in court for allegedly siphoning off millions of the congregation’s money to support his wife’s singing career.

Hee’s arrest — and that of fives other leaders in the church — followed a two-year investigation by Singapore’s Commissioner of Charities and the Commercial Affairs Department of the Singapore police into City Harvest Church. 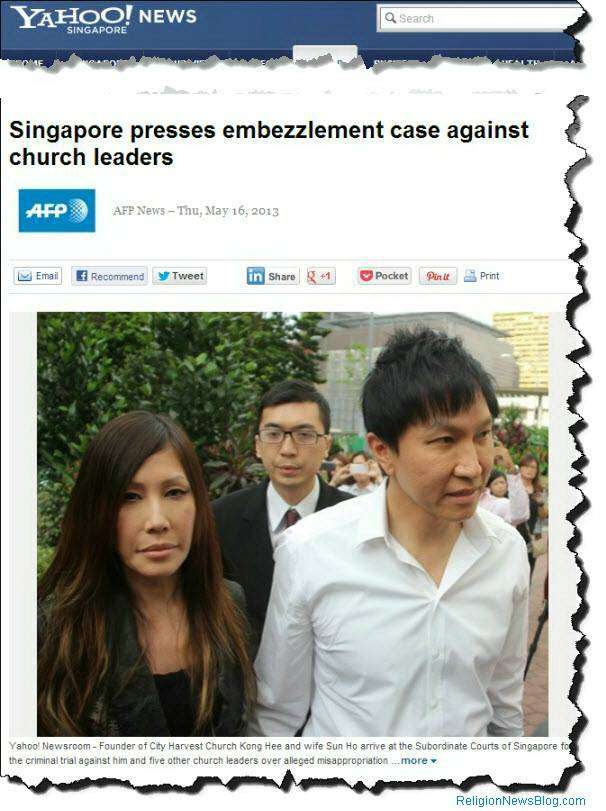 The accused have agreed to be jointly tried, and the trial started on May 15.

The prosecution alleges that the six leaders, all members of the church’s management board, have misappropriated more than Sg$50 million (nearly US $40 million) of church funds and have committed criminal breach of trust.

As reported by the Wall Street Journal, according to the Commissioner of Charities

“[The] funds were used with the purported intention to finance Ho Yeow Sun’s secular music career to connect with people,” the Commissioner of Charities said in a statement released Tuesday. “There was a concerted effort to conceal this movement of funds from its stakeholders.”

That has not happened.

Instead, AsiaOne says a loss of more than $14 million was made from the production of an album for the pop singer.

Prosecutors at the start of the trial Wednesday said the accused channeled money allotted for the church’s building into buying sham bond investments in church-linked companies so they could finance Ho’s secular music career.

They allegedly falsified church accounts to make it appear the bonds were redeemed, in a practice the prosecutors called “round-tripping”.

“These transactions were thus designed to throw the auditors off the scent of the bogus bonds,” said Deputy Public Prosecutor Mavis Chionh.

Sun Ho herself is not on trial, the Brisbane Times says, and early this week she

City Harvest Church was co-founded in 1989 by Kong Hee and Sun Ho.

It has more than 30,000 members, assets estimated at more than Sg$100 million (figures from 2009), and affiliates in Malaysia, Taiwan, Indonesia, Australia and 44 other countries.

City Harvest teachings emphasize a version of the prosperity gospel — a doctrine that teaches material blessings and health are God’s will for all Christians, as long they donate large sums of money to whomever tells them about this scheme.

The church’s teachings and practices appear to veer into an abusive use of authority.