You are here: Home | FLDS | Jedi Force is waning in Canada; and other religion news briefs

Jediism losing followers
The Force is waning in Canada. New census data released by Statistics Canada shows people identifying themselves as Jedi in the 2011 National Household Survey dwindled from a peak in 2001 of more than 20,000 to a about 9,000 — a figure too small to be statistically relevant.

Also inside: Religion in the Canadian Census; Scientology; Narconon; Santa Muerte; and the Twelve Tribes. In other Religion Briefs: David Bowie; French report on sects; FLDS; Paganism; and Christian hypocrisy…

The Jedi religion started as a joke between friends, but real-life Jedis are serious about their faith explains Maha Vajra, the self-described Grand Master of the Canadian Order of the Jedi in a recent interview.

They see the Star Wars films as inspirational and fantasy parables, in much the same way other religions use fantastic stories to glean morals, Canadian Press writes.

Jediism is the study of the philosophies largely borrowed from Buddhism and Daoism in the Star Wars film series, Vajra said in an interview from St-Raymond, Que.

“What we do is what the masters of Jediism in the movies explain: self-mastery, responsibility, practising virtues like compassion, charity, (and) forgiveness, in everyday actions. This is what Jediism is.”

The religion has followers in other countries as well, where numbers also fluctuate.

Census takers have not always been pleased with Jedi-related pranks. In Australia, Star Wars fans circulated an e-mail saying the government would be forced to recognize Jedi as an official religion if at least 10,000 people named it on the census.

When made aware of the campaign, the statistics agency announced that respondents faced a fine of AUS $1,000 ($540) if they were found to have given false information.

Still, some 70,000 Australians declared themselves to be Jedis, and it appears none of the were fined.

By the way, among the oddest Jedi-related news stories archived at Religion News Blog are these ones from England:

Religion refers to the person’s self-identification as having a connection or affiliation with any religious denomination, group, body, sect, cult or other religiously defined community or system of belief. Religion is not limited to formal membership in a religious organization or group. […]

Persons without a religious connection or affiliation can self-identify as atheist, agnostic or humanist, or can provide another applicable response.

Nearly one-quarter of the Canadian population, some 7.8 million people, claimed no religious affiliation in 2011, up from 16.5 per cent in 2001. Matter of fact, the percentage of people who do not feel aligned with an organized belief has nearly doubled over the past two decades.

But the Canadian Press quotes Morton Weinfeld, a sociology professor at McGill University in Montreal, as saying that the arrival of religious immigrants has worked to offset the country’s growing secular population.

Not all that impressive for a movement that says it’s the fastest growing ‘religion’ (their term) in the world. Then again, the Church of Scientology has never been good at numbers or facts.

Narconon Oklahoma under oversight
Speaking of Scientology: The Governor of Oklahoma has signed a bill requiring oversight of Narconon Arrowhead and other drug rehab organizations.

Narconon — a Scientology front group based on the quackery taught by the cult’s founder, fantasist L. Ron Hubbard — is in a heap of trouble in various states.

” I decided that the entire Narconon program is based on fraudulent practices.”

The Vatican vs Saint Death
A senior Vatican official has condemned the cult of Santa Muerte, or Holy Death, in Mexico as “blasphemous”.

Speaking in Mexico City, the president of the Vatican’s Pontifical Council for Culture, Cardinal Gianfranco Ravasi, said worshipping Santa Muerte was a “degeneration of religion”.

Cult of Christianity vs Bob Dylan
A communal religious movement known as The Twelve Tribes is trying to recruit Bob Dylan fans. 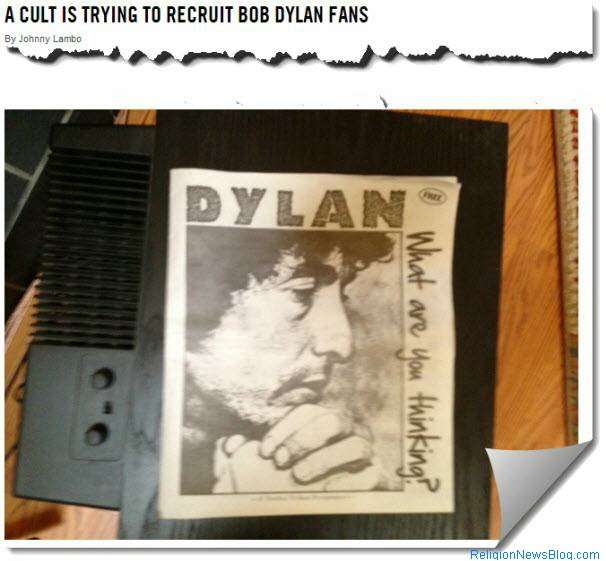 Johnny Lambo, at Vice.com, is rather creeped out by it, but thinks the group’s followers are “essentially Christians who take the Bible literally” — though he does pick up on the fact that “they’re pretty open about being racist, antisemitic, sexist, and homophobic.”

In fact the group’s aberrant and heretical teachings identify it as, theologically, a cult of Christianity. Sociologically, there are cult-like elements as well, including the high level of control leveled over the group’s followers.

Note that this cult (which says it isn’t) has also been spotted at Greatful Dead concerts — and its members even go after Christians.

The Doomsday Prophets on Main Street

Research resources on the Twelve Tribes

From Dylan to Bowie: David’s Bowie’s latest music video may be too anti-religion for YouTube.

The latest report (in French) by Miviludes, the French religious sect watchdog, says the organization has registered over 2,300 referrals in 2011, an increase of 25% compared to 2010, and that this trend continued last year with an increase of 22% over the first eight months of the year compared to the same period in 2011.

But the organization notes (French) the increase may merely be due to the fact that more people are familiar with Miviludes and its growing website. [Google translation]

The Los Angeles Times has another story about what life is like for young people after they have escaped the clutches of the Fundamentalist Church of Jesus Christ of Latter-Day Saints, the “breakaway sect of the Mormon Church that practices polygamy, dictates almost all aspects of people’s lives and casts women into subservience.”

Sect members who escape their compound are largely invisible to society, and are often without birth certificates or Social Security numbers.

Sect members who escape their compound are largely invisible to society, and are often without birth certificates or Social Security numbers.

“They’re akin to a refugee population, except they were born in the U.S.,” said Shannon Price, director of the Diversity Foundation, a nonprofit that specializes in offering financial aid and scholarships to 400 polygamist children.

As pagans mark one of the most important weeks in their calendar, Pentagram — Britain’s oldest pagan society — explains what paganism is all about.

We’ve got some research resources on Paganism at Apologetics Index, including an article that may help Christians evaluate whether they should seek a dialogue with pagans.

A new report from Barna Group, a Christian research organization, indicates that most of today’s Christians are more like the Pharisees than Jesus.

After surveying 718 self-identified Christians from a variety of denominations, Barna’s researchers found only 1 in 7 Christians manages to hold Christ-like beliefs and also act in Christ-like ways.

“This research may help to explain how evangelicals are often targeted for claims of hypocrisy; the unique ‘sin’ of evangelicals tends to be doing the ‘right’ thing but with improper motives.”