In October, 2007, a Washington state couple accused of starving their adopted 13-year-old Ethiopian-born daughter and locking her outside in the cold, where she died from exposure, pleaded not guilty to homicide and child abuse charges.

At the time prosecutor Richard Weyrich told NBC station KING 5 that Hanna Williams’ death ranks right up there among the worst cases he’s ever prosecuted.

But the severity of the charges to be filed against Larry and Carrie Williams depends on whether the girl was younger than 16.

The hope of verifying Hana Williams’ age at the time of her death is now pinned on an attempt to track down an Ethiopian man believed to be her uncle.

The homicide by abuse charge only applies to children younger than 16.

Originally from Ethiopia, Hana was believed to have been 13 at the time of her death. Her exact age is uncertain because birth documentation has been unavailable.

Prosecutors say they have had difficulties getting in touch with the man after making initial contacts.

The next hearing in this case is set for June 7.

Larry and Carri Williams are also charged with first-degree child assault for the alleged abuse of their adoptive Ethiopian son.

Incidentally, this is yet another case in which the controversial book “To Train Up A Child,” by Michael and Debi Pearl of ‘No Greater Joy Ministries’ features in a murder investigation.

A witness told investigators that the Williams got their ideas for the disciplinary measures from the Pearls’ book, which recommends switchings with a plumbing tool, cold water baths, withholding food and putting children out in cold weather as forms of punishment.

How harmful are the teachings of Michael and Debi Pearl?

Pastor on trial for animal cruelty

Among today’s head-scratchers is this one: The trial of Texas pastor Rick Bartlett, accused of animal cruelty, is set to begin today. He is charged with animal abuse in the death of a neighborhood cat.

He was arrested in January last year, and has since resigned from the Bastrop Christian Church.

Though members of the Church of Scientology often claim to be ‘the most ethical people on earth’ the cult they are part of is known for, among other unethical behavior, its deceptive practices.

The latest case in point: the space alien cult has been caught photoshopping one of its events to make it appear that more people were in attendance than eyewitnesses report.

The event: Scientology opened a so-called ‘Ideal Org’ in Portland, Oregon. These tend to be spacious, luxurious ‘palaces’ meant to convey a sense of success and respectability — two things the Church of Scientology sorely lacks and won’t be graced with any time soon.

The cult claims that 2,500 people attended the opening, but eyewitnesses report only 450 – 750 attendees. Long-time observers are not surprised that Scientology — which falsely claims to be the fastest growing religion on earth — isn’t good at numbers. But they see an increasing level of desperation in the cult’s attempts at deception. 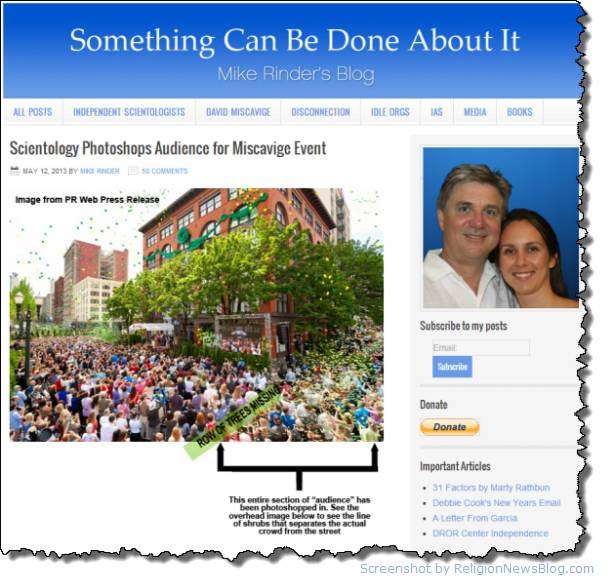 Of course Scientology has been caught photoshopping before.

Perhaps the cult’s Hollywood devotees (also pursued in order to gain a measure of ‘respectability’) don’t mind Scientology’s make-belief world, but out here in the real world these kind of shenanigans only serve to make the, er, ‘church’ look silly.

Bottom line: if you’re shopping for a religion, don’t buy into one (take that literally) that has to resort to photoshopping.

Favorite Quote of the Day

The Bible calls individuals who have dedicated themselves to the worship and service of the one true God as revealed through his Son, Jesus Christ, “saints.”1

But the Catholic Church, which believes it occupies a special place as far as churches go, declares saints — as in this news item:

Pope Francis on Sunday gave the Catholic Church new saints, including hundreds of 15th-century martyrs who were beheaded for refusing to convert to Islam, as he led his first canonization ceremony Sunday in a packed St. Peter’s Square. […]

Their approval for sainthood was decided upon by Francis’ predecessor, Benedict XVI, in a decree read at the ceremony in February where the former pontiff announced his retirement.

According to one Catholic priest, the Vatican got into the saint-declaring business “mainly to ensure that no unworthy people were declared saints.”

In case you’re wondering, here’s how to become a Saint as officially recognized by the Catholic Church.2

But you’re better off checking the GotQuestions.org site, which — referring to the Bible — says, “scripturally speaking, the “saints” are the body of Christ, Christians, the church. All Christians are considered saints.”