You are here: Home | homosexuality | Christians and Homosexuality; Peace activists on trial; more…

According to Peter Sprigg, a spokesman for The Family Research Council, and other evangelicals “changing attitudes toward homosexuality have created a new victim: closeted Christians who believe the Bible condemns homosexuality but will not say so publicly for fear of being labeled a hateful bigot.”

Changing attitudes among members of Christian denominations in the US are reflected in a March, 2013, survey by the Public Religion Research Institute: “59% of Hispanic Catholics, 58% of white Catholics, and 55% of white mainline Protestants favor allowing gay and lesbian couples to marry legally.

By contrast, more than 7-in-10 (71%) white evangelical Protestants, nearly two-thirds (65%) of Hispanic Protestants, and 57% of black Protestants oppose same-sex marriage.”

Also, “White evangelical Protestants (65%) are more likely than other religious groups, including religiously unaffiliated Americans (57%), minority Christians (51%), Catholics (49%), and white mainline Protestants (48%), to say they are absolutely certain that their views on the issue of same-sex marriage are right.”

The Prophets of Oak Ridge 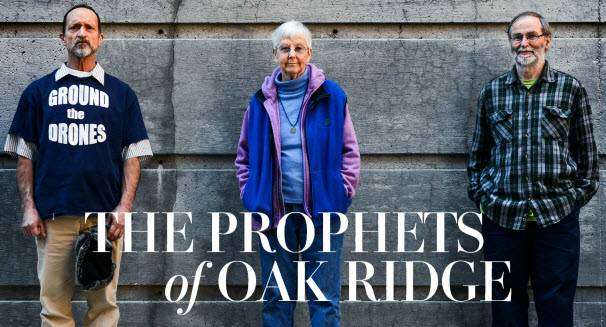 This week three peace activists — a drifter, an 82-year-old nun and a house painter — go on trial in the U.S. on charges that fall under the sabotage section of the U.S. criminal code.

Last summer, in the dead of night, they penetrated the exterior of Y-12 in Tennessee, one of the most secure nuclear-weapons facilities in the United States.

Mission planning involved searching the Bible and the Internet.

The Y-12 break-in is the latest “Plowshares” disarmament action, a tradition of symbolic and intrepid civil resistance dating to September 1980, when the Berrigan brothers and six others hammered on Minutemen missiles and poured blood on documents at the General Electric weapons plant in King of Prussia, Pa. The Plowshares activists take their name and inspiration from Isaiah 2:4, a verse prophesying a world without war.

Is that God Talking? Audibly?


What do we make of people who report that God talks them them — in an audible voice?

T. M. Luhrmann, a professor of anthropology at Stanford and the author of “When God Talks Back: Understanding the American Evangelical Relationship With God,” says “I don’t think that anthropologists can pronounce on whether God exists or not, but I am averse to the idea that God is the full explanation here.”

She also rules out schizophrenia, but says “I eventually discovered that these experiences were associated with intense prayer practice. They felt spontaneous, but people who liked to get absorbed in their imaginations were more likely to experience them.”

When you rely on Google News to find news articles regarding the Church of Scientology, two things become apparent:

Even more pathetic are Scientology’s responses to articles that do not quite put the cult in a good light.

The New York Review of Books recently posted Scientology: The Story — an indepth review by Diane Johnson of two recent book published about the controversial movement:

That review has attracted the attention of Karin Pouw, Public Affairs Director, for the Church of Scientology International in Los Angeles, California.

In a response published by the New York Review of Books, Pouw — not for the first time — shoots herself in the foot as she attacks Johnson.

Be sure to read Diane Johnson’s response.