A young woman who, depressed after a stay in a Nigerian cult camp is recovering from her experiences at a counseling center in Ohio, says she may have some insight into how Tamerlan Tsarnaev, 26, and his 19-year-old brother Dzhokhar may have committed to a killing-cause.

“My heart actually kind of goes out for the young guy who, as awful as it is, I believe you have to be totally mind controlled … to do something like this at the age of 19,” she said.

“You don’t just do something like it for the sake of it.”

Connie was led in to the cult by her own mother (who was not aware of the true nature of the group) “to curb her rebellious spirit.”

The grip of the cult leader, known to its followers as “The Prophet,” was so strong she said she would have done anything he would have required.

“If he had told me to something … to hurt someone, the thing that’s scary is that he had such influence over me,” she said.

“Yea I could have done something that I would have seriously regretted.”

Schooled in Arabic and Middle-Eastern studies, Connie did her dissertation on Islam and Sharia law, and now uses her perspective to offer advice on combatting terrorism.

Wellspring Retreat & Resource Center, in Albany, Ohio, is a non-profit residential treatment facility that provides a program of counseling and instruction to victims of cultic abuse, religious abuse and/or mind control:

Mind control and the Boston bombers

In the aftermath of the Boston bomb attack, cult counselor and mind control expert Steve Alan Hassan was interviewed by a number of news media looking for insight into the actions of the bombers.

Steve Hassan is a Nationally Certified Counselor (NCC) and also a Licensed Mental Health Counselor (LMHC) in the Commonwealth of Massachusetts, and is considered an expert on destructive mind control issues.

Ex-cult members and others seek him out for specialized counseling to help them recover from symptoms other mental health professionals — and some self-declared ‘cult experts‘ — are not trained to address.

His latest book is Freedom of Mind, which is also the name of his website. 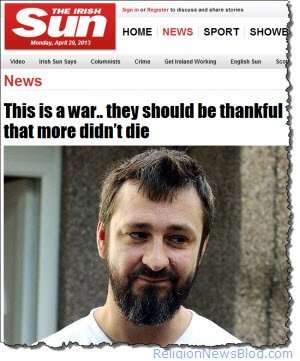 While most Muslims are peaceful believers in word and in deed, many adherents of fundamentalist expressions of Islam are extremists with dangerous ideas and despicable opinions.

They claim to follow what they consider to be the ‘purest’ form of Islam, but they spew nothing but hatred.

That is the case with Khalid Kelly (formerly Terence Kelly), an Irish Muslim who once threatened to kill Barack Obama.

In an interview with the Irish Sun, the extremist — who is nicknamed Taliban Terrry — has refused to condemn the Boston bombers and claimed they gave Americans ‘a taste of their own medicine’.

Scary stuff. Reminds us that almost a quarter of British Muslims believed the July 7, 2005 bomb attacks in London — Islamic terrorism — were justified.