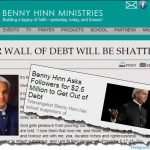 It’s a Bible-based scam designed to trick people into believing that God wants you to get rich, but that you first have to demonstrate you’ve got enough faith — by donating money to whomever tells you about this scheme.

Hinn recently tried this trick during a ‘miracle crusade’ in Trinidad.

But as we’ve pointed out before: If this scam worked as advertised, prosperity preachers would be sending you money — and would no longer have to ask for donations.

Not surprisingly, though he is not lacking in resources, the scheme is not working for Benny Hinn.

Televangelist Benny Hinn has asked supporters of his ministry for $2.5 million in donations, which he says an anonymous donor will match dollar by dollar to help him get out of debt.

Get out of debt? What gives? 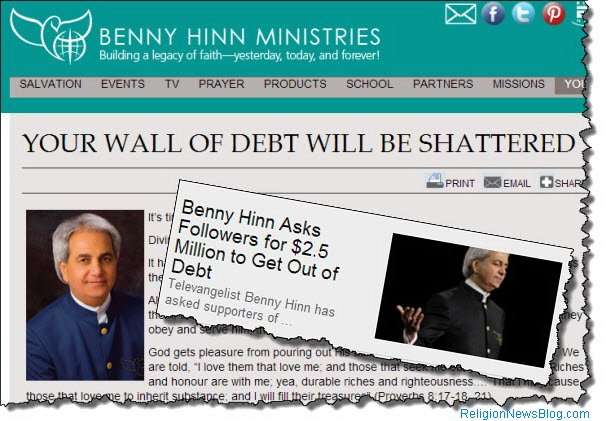 In an article titled, “Your Wall of Debt Will Be Shattered” — posted at his website — Hinn tells people who are in debt that they simply have to ‘sow seeds.’ Sowing seeds is a euphemism for donating money.

Clearly this hasn’t worked for Benny Hinn himself.

In our opinion Christians ought to stay away from this man. Those why keep following his teachings, along with those who actually support him, are not practicing spiritual discernment.

Research resources on the teachings and practices of Benny Hinn