Police in Chile have arrested members of a tiny religious cult for allegedly burning a baby alive on a bonfire in the belief that the child was the ‘antichrist.’ 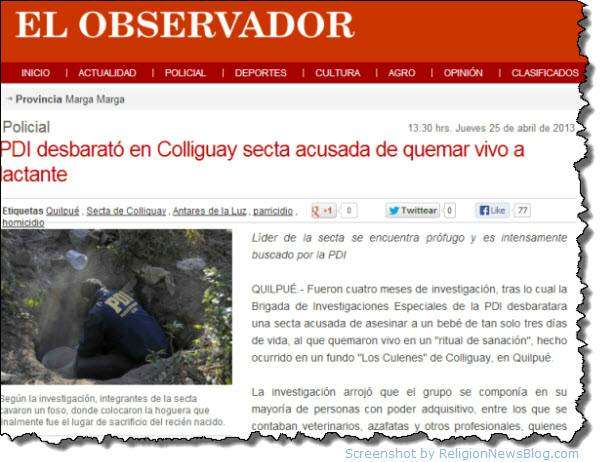 The baby was reportedly killed with the approval of her mother, Natalia Guerra, 25.

“The baby was naked. They strapped tape around her mouth to keep her from screaming,” said Miguel Ampuero, of the Police Investigative Unit, Chile’s equivalent of the FBI.

“Then they placed her on a board. After calling on the spirits they threw her on the bonfire alive.”

The alleged murder took place last November in the region of Colliguay, near QuilpuÃ©, in ValparaÃ­so.

Eight members, five women and three men, took part in the ritual sacrifice — reportedly while under the influence of Hoasca, a brews that includes the hallucinogen dimethyltryptamine.

The child’s mother is among four cult members who have been arrested.

The mother has confessed to police, saying that everyone in the group knew the child would be sacrificed shortly after birth.

Police investigator Miguel Ampuero had told the media that all of the cult members are professionals.

“We have someone who was a veterinarian and who worked as a flight attendant, we have a film-maker, a draftsman.

“Everyone has a university degree.”

Cult leader claims to be a deity

Cult leader RamÃ³n Gustavo Castillo Gaete, whose age is variously reported as 35 or 36, remains at large — along with several of his followers.

According to authorities Gaete believed that the end of the world was near and that the three-day-old child was the antichrist. 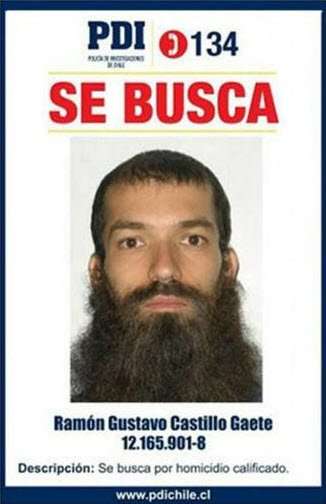 He refers to himself as “Antares de la luz” (Antares of the Light), and claims to be a deity.

Followers donated large sums of money to him, much of which was used to lease various properties.

Police say the cult leader had sexual relations with the women in his group, and that he may in fact be the baby’s father.

Members who were judged to have a ‘low level of positive vibrations’ were beaten with sticks by Gaete.

Authorities say Gaete left Chile for Peru last February where he has established a similar sect — though some media reports claim he went there to buy more Hoasca. An international arrest warrant has been issued for him.

Regarding the fact that members of this cult reportedly all are professionals, see this information by cult experts Janja Lalich and Madeleine Tobias:

people who join cults are not stupid, weird, crazy, weak-willed, or neurotic. Most cult members are of above-average intelligence, well adjusted, adaptable, and perhaps a bit idealistic. In relatively few cases is there a history of a pre-existing mental disorder.

Anyone is capable of being recruited (or seduced) into a cult if his personal and situational circumstances are right.