Prosecutors in Philadelphia are awaiting the autopsy results of an 8-months-old boy whose ‘faith healing only’ parents are on probation in the 2009 death of their 2-year-old son.

In 2011 Herbert and Catherine Schaible promised a judge that they would never again choose religion over medicine, before they were sentenced to 10 years probation.

Convicted of involuntary manslaughter, they had each originally faced more than 10 years in prison.

Under the terms of their probation their remaining children were to receive regular medical checkups, while probation officers had access to their medical records.

A funeral home contacted by the boy’s parents had notified the Medical Examiner’s Office, which in turn informed police.

Investigators subsequently processed the house as a crime scene.

The couple has not been charged pending the autopsy results. They were not held because their seven remaining children have been removed from the house by the Department of Human Services.

The Schaibles face five to ten years in prison for the probation violation.

According to the Philadelphia Inquirer

The Schaibles gave statements to investigators last week, Lerner said, both admitting they believed that prayer was the best remedy for Brandon’s suffering.

“When asked why you didn’t call a doctor or seek a medical professional, you said, ‘Because we believe God wants us to ask him for healing,’ ” Lerner said. “You did that once, and the consequences were tragic.”

Lerner said the couple “knowingly, intentionally, hypocritically and callously violated” the most important term of their probation. […]

“You are not a danger to the community,” Lerner said. “You are a danger to your children.”

Herbert and Catherine Schaible are members of the First Century Gospel Church in northeast Philadelphia.

In sermons posted at its website, the church — led by pastor Nelson Clark — claims that “Bible Christians trusted God alone for healing.” 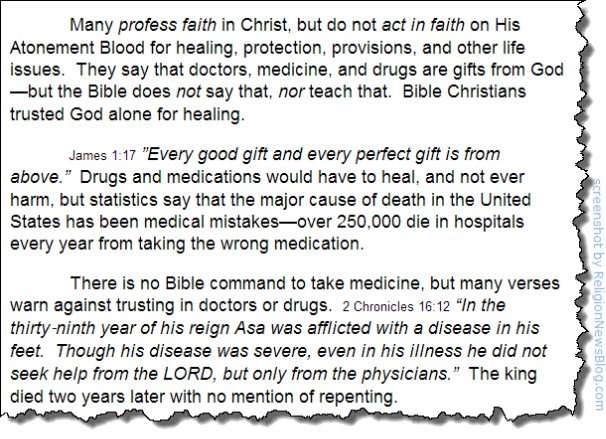 The 500-member church also teaches that “it is a definite sin to trust in medical help and pills.”

According to the church, in a message titled How To Be Saved and Kept, the church essentially says that a person’s salvation depends on trusting God to heal without medical help or medicine:

The teachings of the First Century Gospel Church regarding faith in relation to healing, medicine and medical help are un-biblical. They violate essential Christian doctrine regarding salvation.

That makes the church theologically a cult of Christianity.

Its false teachings on this subject are a form of spiritual abuse.

As our parent site, Apologetics Index, points out:

The Bible does not condemn, forbid, or even discourage the use of medicines or other proper medical care.

Matter of fact, Luke, who wrote the Gospel of Luke

And the apostle Paul advised Timothy to use some wine for his stomach problems:

Stop drinking only water, and use a little wine because of your stomach and your frequent illnesses.
– Source: 1 Timothy 5:23

Note, too, that Paul does not criticize Timothy for his “frequent illnesses.” Nor does he even suggest that Timothy’s illnesses indicate a spiritual problem such as lack of faith. Instead, Timothy is seen as a spiritual leader

and a good example

While Jesus healed many people himself, he spoke of physicians in a positive way:

On hearing this, Jesus said to them, “It is not the healthy who need a doctor, but the sick. I have not come to call the righteous, but sinners.”
– Source: Mark 2:17