Televangelist Juanita Bynum spent last Thursdays night in a Dallas jail after she was arrested on a warrant for failure to appear in a civil proceeding against her.

According to the Dallas Morning News she was released the next day, after appearing in court to answer questions in the case, which involves a 2007 judgment ordering her to pay $140,000 to ALW Entertainment.

Headed by Al Wash, ALW Entertainment bills itself as the “premiere music and entertainment company in the country.”

Wash’ attorney, David Anthony Small, says Bynum was sued by Wash for failing to perform in a play based on her famous sermon, “No More Sheets,” for which he had paid her.

Small, filed a motion petitioning all of Bynum’s financial records, including copies of her banks statements, tax records, and proof of income. Not only did she not produce the court ordered documents, she didn’t show up for the hearing. Smalls was left with no other choice than to have a warrant taken out.

Bynum was arrested just as she was about to speak at the 9th Annual Spring Prophetic Conference held at Marriott Las Colinas. 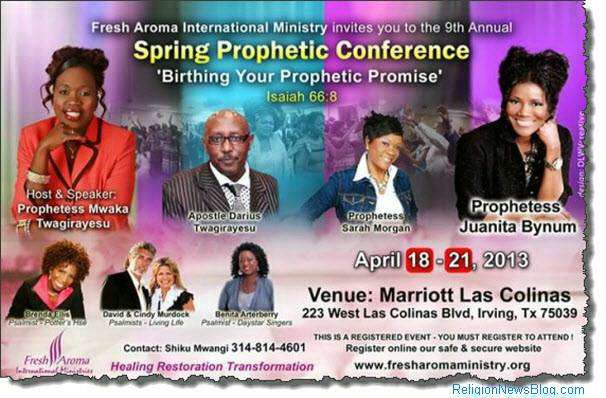 She was picked up on a so-called ‘capias warrant.’ The ultimate goal of a capias warrant is to force someone to comply with a court order.

Bynum, who considers herself a ‘prophetess, is a well-known author, gospel singer, and televangelist. She is a prime promoter of the ‘Prosperity Gospel‘ — a ‘spiritual’ scam in which people are told God wants to make them rich, but can only do so if they show faith by donating money to someone else (usually the ‘evangelist’ who teaches that stuff).

Here’s a sampling of her teachings on the subject:

Obnoxioustv’s Blog says the evangelist was “held on a $10K bond, which she was unable to meet.”

While in the hearing, Bynum told the judge her income varies, and she has no set salary but lives off of honorariums which range from $500 — $2 million.