Joel Osteen, senior pastor of Lakewood Church in Houston, Texas, has become the target of an elaborate online hoax in which he ostensible claims that he has left the Christian faith. 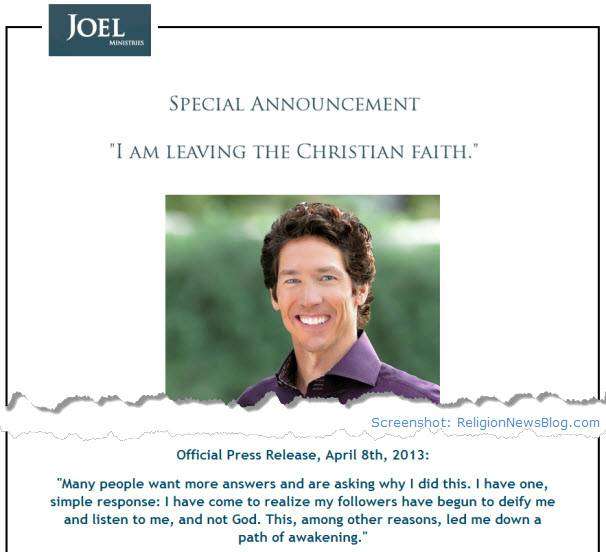 The hoax site says Osteen conducted an interview with Christianity News Texas, a blog hosted at blogspot.com, to explain his decision.

That site in turn claims to quote a CNN story on Osteen’s move. 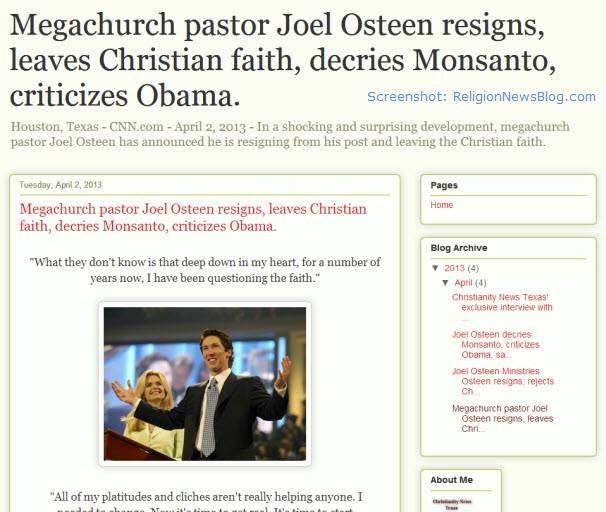 True to form, Osteen is turning the other cheek and spinning this bit of adversity as part of his core message.

“You can’t stop everything from happening, but you can choose to say, €˜God, it’s in your hands’. I’m going to move forward. I’m going stay full of joy and I’m going enjoy this day,” Osteen told ABC News.

While the leader of the 45,000 member church is adopting a forgiving attitude, he did not rule out taking some sort of legal action.

The website’s domain was registered to a group called BMG Enterprises in Milwaukee and it went live on April Fools’ Day.

the man behind the hoax says he wants the pastor to “do away with the soft ‘positivity’ and cliche-peppered Sunday messages and use his high visibility to address more serious social issues.” […]

As for his motivation, the man, who says he hasn’t made any money from the Osteen project, says that his “intent was to stage, for a moment, a plausible scenario of his hypothetical resignation” and to “test viral media markets,” in addition to sending a message to Osteen.

Meanwhile, Joel Osteen remains a controversial figure, with many Christians claiming that he preaches a version of the gospel known as ‘Christanity Lite.’