Brazilian evangelist Valdemiro Santiago, who refers to himself as an ‘apostle,’ is the founder of Igreja Mundial do Poder de Deus — Worldwide Church of God’s Power.

Fourteen years after he started out in the countryside outside Sao Paulo, Santiago sits at the helm of a booming Pentecostal church in Brazil, the world’s fastest-growing evangelical country. He now leads 4,000 churches, including 10 in the United States, where fiery worship and exorcisms form part of the appeal.

If that sounds a lot like another Brazilian church, Igreja Universal do Reino de Deus (Universal Church of the Kingdom of God), that’s because, as RNS notes, it is

the only successful breakaway from the larger Universal Church of the Kingdom of God — headed by Santiago’s former mentor, Bishop Edir Macedo, who has since accused Santiago of working for the devil.

Many Christians would say the same thing about Macedo, whose church is a cult of Christianity that promotes the prosperity gospel scam and is known for pressuring people into giving more and more money in exchange for God’s attention in the form of blessings, exorcism, and physical healing.

Santiago targets, among others, America’s growing population of Hispanics and non-immigrant whites.

He has vast personal wealth. According to Forbes several Brazilian business magazines estimate his net worth at $220 million.

But RNS says that

Despite reports in the Brazilian press of the apostle’s $3 million mansion, his private jet and helicopter, and his recent fine for illegally endorsing a political candidate, the crowds still come.

What you should know about the Prosperity Gospel

A primer on the Aryan Brotherhood gang

Authorities in the U.S. are not sure whether the Aryan Brotherhood of Texas, a white supremacist group, is behind the murders of two Texas prosecutors.

But, says, CNN, “a series of events leading up to the killings have raised questions about the group’s possible involvement.”

The hate group is said to have committed 100 homicides and at least 10 kidnappings since the early 1980s.

CNN quotes Mark Potok of the Southern Poverty Law Center, a hate groups watchdog, as saying he thinks “the Aryan Brotherhood of Texas today is arguably the most violent white supremacist prison gang out there.”

In a 1998 report titled, “Bigotry Behind Bars: Racist Groups In U.S. Prisons,” the ADL said

Research resources on the Aryan Brotherhood

The station has posted a primer on the group.

The Russian Airborne Force now includes an army of parachuting priest, ready to serve in mobile Orthodox chapels that can be airlifted in to wherever soldiers may be stationed, writes Oliver Wainwright at The Guardian 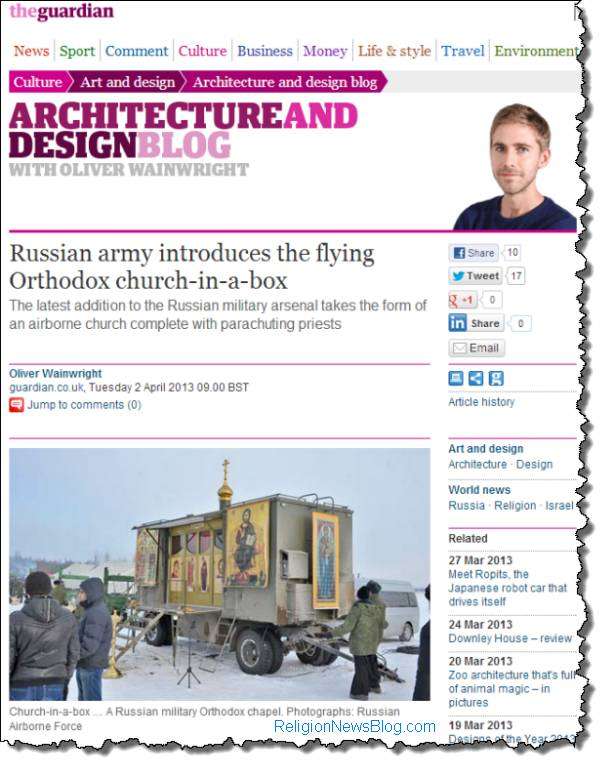 Before cult leader Jim Jones moved his followers into the jungle of Guyana, where he eventually presided over the group’s mass murder/suicide, he temporarily used a church building in that country’s capital, Georgetown.

An electrical fire destroyed that building in 2004, but AP reports a new Catholic church will re-open on the site in December.

A public-fund corruption case in Colorado City, Arizona — a town dominated by the polygamous Fundamentalist Church of Jesus Christ of Latter Day Saints (FLDS) cult — has ended in plea deals.

It’s another example of limited success in various prosecutions in the predominantly polygamous community heavily influenced by the Fundamentalist Church of Jesus Christ of Latter Day Saints. […]

Defense attorneys involved in the cases argued that the prosecution was unwarranted and reflected bias against elected officials of a community heavily scrutinized for widespread practice of a multiple-wife lifestyle. Prosecutor James Schoppmann insisted that the case had nothing to do with the FLDS and targeted public officials who violated their fiduciary duty and abused public trust by misuse of the treasury.