You are here: Home | Amsterdam | Scientology Amsterdam ‘a small and failing org’

The Amsterdam, Netherlands, base of the Church of Scientology is referred to by the cult’s head office in Los Angeles as an ‘SFO’ — a small and failing org, Jenna Miscavige tells local daily Het Parool.

Miscavige, the niece of Scientology’s current cult leader David Miscavige, is in Amsterdam to promote her book, Blind Geloof — the Dutch translation of Beyond Belief: My Secret Life Inside Scientology and My Harrowing Escape.

“A small and failing org has problems such as coming up with timely rent payments, or attracting new members,” Miscavige says. 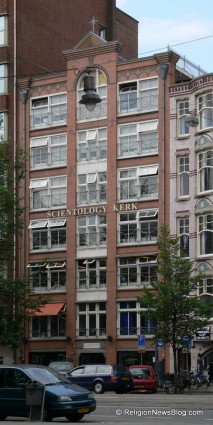 She tells the paper that foreign Scientology missions are expected to pay ten percent of their profits to the mother church, but Scientology’s Amsterdam base does not do so because it is insolvent.

The Church of Scientology — known for its history of hate- and harassment activities against former members and other critics — has fired a withering attack on Miscavige.

The cult’s unethical behavior is based on the writings of its founder, L. Ron Hubbard.

Scientology Amsterdam has faced rent arrears a number of times.

The cult is thought to have no more than 500 members in the Netherlands.

Nevertheless, the organization has been wanting to buy a huge office complex at a different location in the city.

But when Het Parool reported that Scientologists were using loopholes to accept tax-deductable for the so-called €˜Ideal Org’ through the Nabesa foundation — one of the church’s front groups — that foundation lost its charity status. As a result, financing the purchase of new offices has faltered.

The Church of Scientology Amsterdam itself is not considered a charity or public benefit organization, and therefore donations made directly to the cult are not tax deductible.

At the time former Scientology recruiter John Leemhuis said “they have been in financial trouble for years. First we were housed at the Nieuwezijds in a building from De Slegte, at a rent of DFL 10.000 ($5200) a month, and even that we couldn’t always pay. We had to leave that building, and now we’re a litte further up the street in a building that rents for Dfl 40.000 ($20.800) a month! The telephone service is regularly cut off when there is no money. And that is now going to get worse.”

In 2005 Scientology lost a long-running legal battle against freedom of speech in the Netherlands.