Thirteen years ago over 1,000 members of a Ugandan doomsday cult known as The Movement for the Restoration of the Ten Commandments of God were killed.

More than 500 of them died in a massive inferno inside a church whose doors and windows had been boarded up.

Soon more bodies were found at various location on the cult’s properties.

Many turned out to have died of poisoning. Others had been clubbed, strangled or hacked to death. Local media organizations say that in all anywhere between 1,000 and 1,500 of the cult’s followers were killed.

The cult’s leaders had taught that the world would end by December 31, 1999. It is believed that when the apocalypse kept being delayed, they tried to bring it about themselves.

Others claim the group’s followers were killed so that the leaders could hold on to their land and other properties that were handed over.

Initially, it was thought to be mass suicide, but later a commission of inquiry instituted by the Uganda Human Rights Commission (UHRC), established that it was a well planned murder orchestrated by the cult leaders, Credonia Mwerinde, a former prostitute and Joseph Kibwetere, a former teacher and failed politician.Â

But the paper also notes that 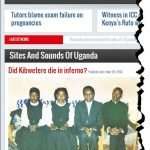 The Government’s commission of inquiry report on the incident has never been published and there is no information on the Government’s response to the recommendations of the UHRC report.

The occurrence of this horrific tragedy, which is arguably one of the world’s worst religious mass murders ever recorded, was expected not only to be an eye-opener to the Government and the public, but also help put in place stringent measures to avert future occurrence of crimes of similar nature and magnitude.

In spite of the horrific mass murder, Ugandans have continued to embrace cults like the Faith of Unity in western Uganda under the leadership of Owobusobozi Bisaka.

Big question: What happened to cult leader Joseph Kibwetere? Did he die in the inferno, or did he escape?