Gary Smith, the chief executive officer of Narconon Arrowhead in Oklahoma, and several of the drug and alcohol rehabilitation center’s employees have had their drug counseling certifications revoked.

Karla Taylor, President of the National Association of Forensic Counselors, can not say why the licenses have been revoked.

But Gary Richardson, an attorney for families whose loves ones died at Narconon Arrowhead, says he is not surprised that the licenses have been revoked.

“They say 76 percent success rate, when there is no way, and when they get into the way they calculate that, then you get to see how ridiculous that is.” […]

“It was joke to even think they had counselors to begin with. So when I started seeing that their certifications had been pulled, it wasn’t a surprise at all.”

While the association won’t give details, Richardson says he was told Smith did not report the three deaths. He lied about education and background information for some employees and he says there were not nearly as many staff members as Smith claimed.

We’re not surprised, either. Narconon is a Scientology front group — and uses the ludicrous medical claims of that cult’s founder, fantasist L. Ron Hubbard, as the basis for its approach. We consider that to be nothing short quackery.

The parents of Hillary Holten, a 21-year-old Texas woman who died last spring after spending two days at the facility, have filed a wrongful death lawsuit.

Holten is one of three Narconon Arrowhead patients to die since October, 2011. Family members of the other victims have filed lawsuits as well.

The Oklahamo location of Narrowhead is not the only one to come under scrutiny by authorities.

In April 2011 health officials in Quebec, Canada ordered the Narconon rehabilitation centre for drug addicts in Trois RiviÃ¨res to evacuate and relocate its 32 residents, citing concerns over procedures that “may represent a risk to health” and a lack of doctors on staff.

That center has now also had its charitable status revoked.

“Narconon is operated as a commercial business venture, with huge sums ending up in Scientology bank accounts. These files confirm to the Charities Commission that Narconon does NOT benefit the community in a way the law regards as charitable. Quite notably, this organization causes far more harm than good as will be evident to the Commission when applying the “Public Benefit Test” as prescribed under the Income Tax Act.”

Meanwhile, The Georgia state Department of Community Health has notified Narconon of Georgia it intends to revoke the clinic’s license for misrepresenting itself as a residential drug treatment facility.

Reason for the Public Religion Research Institute to create a graphic which shows where various religious groups fall on the issue of same-sex marriage. 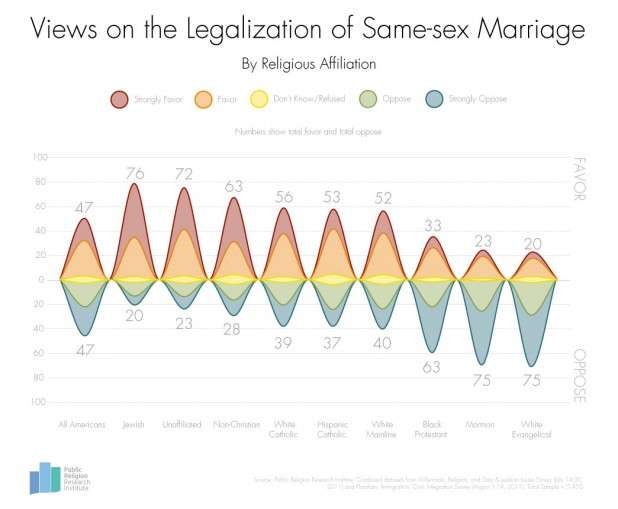 A medicial tribunal in Australia has cleared the resident doctor of a Bruderhof community of misconduct.

The tribunal was held to determine why Chris Maendel failed to transport his mother to a hospital after she collapsed during a visit.

As the Sydney Morning Herald says

Instead, he placed faith over medicine and supervised her decline on the Bruderhof compound where, “surrounded by the love of Jesus”, she died six days later.

Maendel then failed to report her death, and also did not notify authorities of her burial on the restrictive sect’s land.

According to the Sydney Morning Herald

Judge Michael Elkaim ruled that, while two lesser penalties of unsatisfactory professional conduct had been established, Dr Maendel should not be found guilty of the professional misconduct complaint that could have led to him being deregistered.

The ruling has divided the family, with two sons taking opposing views as to whether Maendel acted appropriately.

Dr Maendel admitted he was guilty of unsatisfactory conduct when he failed to take “any steps” to seek appropriate care, the paper notes.

Faith Matters, an interfaith organisation in the UK, says its ‘Tell Mama‘ project has received information about 632 anti-Muslim hate incidents. ‘Mama’ — which stands for ‘Measuring Anti Muslim Attacks’ — also keeps track of attacks by Muslims against other Muslims.

The organisation says three-quarters of the incidents reported took place online, with Twitter particularly highlighted as a source of abuse.

The Tell Mama project wants to carry the same weight as the Community Safety Trust (CST), which has for almost 30 years been recording incidents of anti-Semitism in the UK.

The CST published its annual statistics in February and recorded 640 anti-Semitic incidents across the country in 2012, compared to 608 incidents in 2011.