You are here: Home | Catholic Church | Saint Death becoming more popular in the US

The Associated Press says that the skeleton saint in recent years “has found a robust and diverse following north of the border: immigrant small business owners, artists, gay activists and the poor, among others — many of them non-Latinos and not all involved with organized religion.” 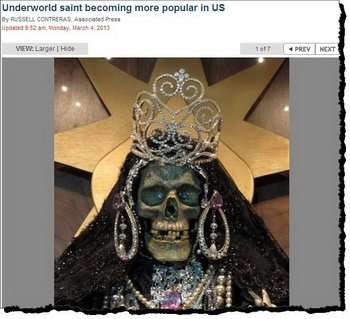 The AP story includes a slideshow

“Her growth in the United States has been extraordinary,” said Andrew Chesnut, author of “Devoted to Death: Santa Muerte, the Skeleton Saint” and the Bishop Walter F. Sullivan Chair in Catholic Studies at Virginia Commonwealth University.

“Because you can ask her for anything, she has mass appeal and is now gaining a diverse group of followers throughout the country. She’s the ultimate multi-tasker.”

Exact numbers of her followers are impossible to determine, but they are clearly growing, Chesnut said.

The saint is especially popular among Mexican-American Catholics, rivaling that of St. Jude and La Virgen de Guadalupe as a favorite for miracle requests, even as the Catholic Church in Mexico denounces Santa Muerte as satanic, experts say.

It is believed that 5 percent of the Mexican population worships the saint, whose other names include Holy Death, The White Girl, The Miracle Worker, and The Skinny Girl.

The Santa Muerte movement is often referred to as a ‘cult,’ but it is not an organized religion, and thus has no central authority. Consequently there is much diversity in rites and beliefs associated with the saint.

The AP story quotes U.S. Marshal Robert Almonte in West Texas as saying that he has testified about La Santa Muerte in at least five drug trafficking cases where her image aided prosecutors with convictions.

“Criminals pray to La Santa Muerte to protect them from law enforcement,” Almonte said. “But there are good people who pray to her who aren’t involved in any criminal activity so we have to be careful.”

The cult of Santa Muerte making inroads in the US

A priest in the village of Castelvittorio, Italy, shocked his congregation when he burned a photo emeritus pope Benedict XVI during Sunday mass.

Referring to Francesco Schettino, the Italian captain who abandoned his sinking cruiseship off the Tuscany coast in January last year, Andrea Maggi stated that “He [Benedict] did what Schettino did and abandoned his flock.” 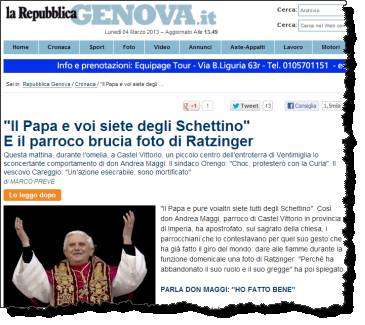 The incendiary act has gotten Maggi into trouble — with members of his congregation, with the mayor of the village, and with the region’s bishop, Alberto Maria Careggio.

If your Italian is up to par you’ll want to listen to this interview with Maggi.

If it’s not, here’s a Google translation of an article in La Republica.

Gambling on the next pope

Like most Catholics, there are few things I love more than the pope and one of them is gambling. Though betting on the pope seems like a sure ticket to hell, St. Louis priests were found betting on the 2005 papal conclave and the Catholic League said they had no problem with it.

So, in light of many bookies taking bets on the coming conclave, here’s a guide to cashing in on the next Vatican leader.

Remember this? Children of God raided

The Herald sun (Australia) revisits the “dramatic raids on the Children of God sect” in the early 1990s.

For background on the case, see this news archive at XFamily.org, a collaboratively edited encyclopedia about the cult.

Theologically the Children of God — since renamed to Family of Love, Family, and The Family International — is a cult of Christianity.

Sociologically the movement is considered a cult as well.

Australian newspapers are having a laugh at Nick Cave.

In his 1997 ballad Into My Arms Cave sang, “I don’t believe in an interventionist God.” The papers suggest perhaps he does now, given that the Hillsong Church has knocked his latest album from the top of the charts.

Nick Cave and The Bad Seeds’ new album Push The Sky Away debuted at No.1 last week – the first in the band’s 30-year career to do so – but on Sunday it was bumped by Zion, by the Christian rock band Hillsong United.

Interestingly, Wikipedia says “in the past, Cave identified as a Christian.”

Cave told me that he does not go to church, and that he is not affiliated with any particular branch of Christianity, but there is no question that his God is a Christian God. When I asked Cave if he had any interest in other religions, or in a broader, non-religious spirituality, he replied, “Oh, a passing, skeptical kind of interest. I’m a hammer-and-nails kind of guy.”

And then there is this 2010 Los Angeles Times article:

“I’m not religious, and I’m not a Christian,” he says decisively, “but I do reserve the right to believe in the possibility of a god. It’s kind of defending the indefensible, though; I’m critical of what religions are becoming, the more destructive they’re becoming. But I think as an artist, particularly, it’s a necessary part of what I do, that there is some divine element going on within my songs.”

As for Hillsong, the church is renowned for its popular worship songs, having released more than 50 albums in the past 20 years. However, theologically the church is controversial for its promotion of Word-Faith theology, with a major emphasis on the so-called prosperity teaching.