You are here: Home | apostles | Five myths (and 10 facts) about picking a pope

Thomas J. Reese, a Jesuit priest, and the author of “Inside the Vatican: The Politics and Organization of the Catholic Church,” relates five common misconceptions regarding the selection of a new pope:

Alright, and now for 10 facts about the papal selection process:

If You Take These Jeans’ Name in Vain, Prepare to Meet Their Maker

An Italian jeans maker persuaded the U.S. Patent and Trademark Office in 2007 to register the word “Jesus” as a trademark, giving the company exclusive rights in America to sell clothing bearing the name of Christianity’s central figure, the Wall Street Journal reports. 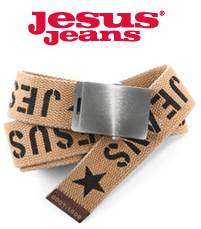 Since then, the owner of the trademark, Jesus Jeans, has clamped down on Jesus-themed apparel, pitting its litigators against more than a dozen other startup clothing lines it claims appropriated “Jesus” without the company’s blessing. The company doesn’t have a trademark on images of Jesus, just the word.

The company says it doesn’t mind if a church “wants to use ‘Jesus’ for printing a few T-shirts,’ but it actively litigates against commercial companies that use the word. And that includes the guy who runs the Jesus Christ Apparel Company.

• Catholics were upset that celebrities hijack rosary beads as a fashion statement.

• Buddhists were not thrilled when Victoria’s Secret came up with a bikini featuring images of Buddha.

• And Hindus were offended when a French footwear company sold shoes with an image of Lord Rama imprinted on them.

Snake-handling preacher gives up his serpents in plea deal

Kentucky pastor Jamie Coots has agreed to a plea deal in which he gives up five snakes — three rattlesnakes and two copperheads — that were seized from him during a traffic stop last January.

The Knoxville News Sentinel says the snake handler pleaded guilty to the illegal possession of poisonous snakes. In return prosecutors agreed to drop a charge for transporting the serpents.

Coot’s attorney says the preacher still believes Tennessee’s law barring him from possessing the snakes and transporting them through Tennessee en route to his Middlesboro, Ky., church is unconstitutional.

National Geographic is producing a reality show about the pastor.

For an authoritatize study of the belief, see Serpent Handling Believers, by Thomas Burton.

For snake handlers, going to church can prove deadly

Are you an Apostle or Prophet yet?

A growing number of Christians are caught up in a burgeoning movement of present-day ‘apostles’ and ‘prophets’ who bring new ‘divine revelation’ they say is needed to set up God’s Kingdom on earth.

They claim to govern the church, which they want to lead into a mission: to take dominion, or sociopolitical control, of the earth.

Who are these self-proclaimed apostles and prohets? How influential is their movement? And what is it that they teach?

A Tatarstan court has recognized a local Muslim religious community, whose members live in isolation, as extremist and banned its activity, the Russian Prosecutor General’s Office said on Monday.

The sect reportedly required its members to live in isolation, prohibiting them from visiting hospitals or sending children to school. The prosecutor’s report also said some family relations were broken due to religious differences.