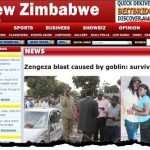 News from over there: A sorceress who survived a massive explosion in her homeÂ in Chitungwiza, Zimbabwe has told investigators the blast occurred during a cleansing ceremony in which her partner, a witchdoctor, beheaded a goblin.

The woman said a customer asked the witchdoctor to dispose of the troubling goblin. He was to pay $15.000 for the ritual, but both he and the witchdoctor died in the explosion. Three other people, including a 7-month old baby, also died. Twelve houses were damaged in the blast.

AAP says that in Zimbabwe superstitious people believe sorcerers can use lightning to eradicate enemies. Neighbors reportedly told reporters they feared a “lightning manufacturing process” was being carried out.

Nina Burleigh says “Jacobovici claims that Zias’ criticisms are libelous and have cost him television contracts and money.”

Incidentally, in 2008 Burleigh published a book titled, Unholy Business: A True Tale of Faith, Greed and Forgery in the Holy Land, which takes readers into the murky world of Holy Land relic dealing.

‘I had to pray for people to die’: Woman who escaped ‘hate cult’ Westboro Baptist Church finds peace with new life full of freedom.

Mexican officials say they have broken up a bizarre cult that allegedly ran a sex-slavery ring among its followers on the U.S. border. The cult is called The “Defensores de Cristo” (“Defenders of Christ”).

One of the Institute’s officials said women were recruited to the sect and then were forced to have sex with sect elders. The official described it as a form of human trafficking that included prostitution.

Former Church of Scientology executive Mike Rinder talks about how he escaped Scientology, and about “The Hole” — Scientology’s prison camp

From the Only In America file: Arizona Pastor Defends Carrying Pistol In The Pulpit On Sundays? — in addition to his sword, perhaps?

Glen Francis, 52, has been sentenced to 25 years to life in prison for murdering an imam in Tucson, Arizona, more than two decades ago.

Authorities believe Rashad Khalifa was killed over his interpretation of the Quaran. He claimed the book contains a mathematical code based on the number 19, and told his followers to reject the last two verses of Chapter 9, which he labeled ‘Satanic.’

Khalifa also believed he was a messenger from God, even though Islam teaches that Muhammed was God’s last messenger. The year before he was killed the Islamic Legal Council of Saudi Arabia issued a fatwa against Khalifa, declaring him to be a heretic.

Chile: Former Leaders of German Sect Colonia Dignidad Sentenced. The cult’s founder, Paul SchÃ¤fer, was sentenced to 20 years in prison in 2008, but died two years ago.

Many survivors of the cult, in which children were abused and opponents of Gen. Augusto Pinochet were tortured, are still trying to come to terms with their nightmare past.

The Roman Catholic Church’s international business- and real estate portfolio was built up largely with money the church was handed by Mussolini in return for papal recognition of the Italian fascist regime in 1929.

The Guardian says, “The surprising aspect for some will be the lengths to which the Vatican has gone to preserve secrecy about the Mussolini millions.”

The victim of a “Muslim vigilante” attack that was filmed and uploaded to YouTube has come forward after a police appeal. The man was one of a number of people who were harassed on east London streets in a single weekend earlier this month.