In a surprising move that promises to transform Mormon social and spiritual dynamics, with aftershocks rippling throughout Utah culture and beyond, the LDS Church announced Saturday a historic policy shift to bolster its proselytizing force. 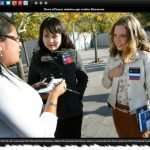 In an article about two Mormon missionaries, the Times Union (Albany, NY), says

There are currently more than 55,000 missionaries serving two-year tours around the world. About 75 percent are men.

Behind the strong marketing arm of missionaries, Mormons have become the fastest-growing religion in 26 states across the U.S., with a 46 percent increase nationally in the past decade to 6.1 million members in 2010, according to census figures. Worldwide, there are about 13.5 million Mormons.

The LDS church claims 14 million members worldwide — optimistically including nearly every person baptized. But census data from some foreign countries targeted by clean-cut young missionaries show that the retention rate for their converts is as low as 25 percent. In the U.S., only about half of Mormons are active members of the church, said Washington State University emeritus sociologist Armand Mauss, a leading researcher on Mormons.

Sociologists estimate there are as few as 5 million active members worldwide. 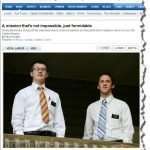 Since the religion’s earliest days, Mormons have been ridiculed, feared, persecuted and harassed. It remains a controversial religion because of its unusual practices, including its past history of polygamy, and a secretive, close-knit culture that some consider a cult.

“We hear that we’re a cult all the time and it doesn’t offend us,” Seymour said. “I tell people we’re not a cult and we haven’t had anything to do with polygamy in more than 100 years.”

The word cult takes on different meanings depending on the context in which it is used.

For instance, a Christian theologian can state that, say, the Mormon Church is theologically a cult of Christianity.

From that perspective — the viewpoint of a Christian — that is true since the Mormon Church rejects, changes or adds to the essential doctrines of the Christian faith to such an extend that Mormonism must be regarded as having separated itself from the faith it claims to represent. While the ‘Church of Jesus Christ of Latter-day Saints’ claims to be not only Christian in nature but also the only true expression of historical Christianity, Mormonism in reality has usurped and plagiarized Christian terminology and scriptures, creating a new religion. […]

Yet those who deal primarily with the sociological characteristics of groups and movements usually find little to nothing in Mormonism and the Mormon Church that would cause them to apply the term ‘cult’ — because their evaluation is based largely on how the group or movement acts, rather than what it beliefs.

As for the comment about polygamy, there is a quite a bit more to that story. See: Polygamy in Mormonism.

By the way, if you encounter Mormon missionaries be kind and friendly to them — just as they will be on their best behavior toward you. But also be prepared to challenge their claims on issues they take for granted.

For instance, you may want to be aware of the many problems facing the Book of Mormon.

More about Mormon Missionaries, including the rigid rules they must follow.

… According to the Salt Lake Tribune

LDS Church President Thomas S. Monson announced Saturday that the Utah-based faith would build two more temples, one in Tucson, Ariz., and the other in Arequipa, Peru. The church operates 139 temples around the globe, with an additional 29 either announced or under construction.

The Mormon Church claims these buildings serve the same purpose as the Jerusalem temple described in the Bible. And, says the Institute for Religious Research,

It also claims that Jesus and His apostles instituted and practiced the secret rituals performed in Mormon temples, including baptism for the dead and eternal marriage. Further, the Mormon Church claims that it is the only true Christian church on the face of the earth, because it alone has “restored” these lost temple practices of original Christianity.

This article will show that there is no basis or support in the Bible or early Christian history for the Mormon temples and the rituals performed in them. They are the invention of Mormon founder Joseph Smith, not something taught in the Bible for Christians of the New Testament age.

Research resources on Mormon Temples and Ordinances, at the Institute for Religious Research