At her trial, in November 2001 Eto was accused of repeatedly beating four ailing cult followers with drumsticks on the pretext of exorcising evil spirits.

She also allegedly hit and kicked them, and they eventually died. The murders took place in January 1995 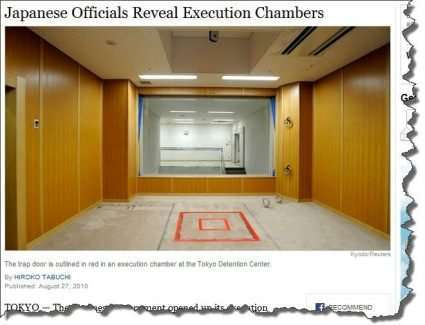 Three other members of her cult were accused of using the same tactics to kill two other followers five months later.

All six victims were buried at Eto’s house. They were identified as Mamoru Miki, 50, his wife Kazuko, 48, their daughter Satoe, 18, the wife’s sister Kimiko Sekine, 46, Tatsuo Igai, 42, and Akemi Senzaki, 27.

In court it was revealed that the victims were those who had started to doubt Eto’s “spiritual ability,” as well as followers who refused to loan her money.

The prosecutor said Eto “tried to make herself a deified ruler and killed people who threatened her authority in her bid to stop her lover Nemoto from being taken by a female follower.”

In her defense, Eto claimed “I did it as part of a religious service. I never thought they were going to die.”

The cult leadeer was sentenced to death in May 2002 by the Fukushima District Court. Two senior followers, Yutaka Nemoto, 27, and Eto’s 30-year-old daughter, Hiroko, were sentenced to life in prison.

The Sendai High Court in November 2005 upheld the sentence.

A subsequent appeal to Japan’s Supreme Court also failed when that court, in September 2008, also upheld the lower court’s ruling.

Eto’s defense attorney had argued that she was not guilty due to mental incompetence as a result of having been ‘possessed.’

But in its ruling the top court said was Eto’s responsibility was “exceptionally grave” because she formed a religious group by claiming to be a god’s messenger and condemned her followers to death by violent means using her absolute power on them.

International human rights organizations have repeatedly called on Japan to abolish capital punishment, but public opinion surveys show that over 85 percent of Japanese believe the death penalty is necessary under certain circumstances.

According to the New York Times Japan has a 99 percent conviction rate, a figure critics attribute to widespread use of forced confessions.

Among those on death row is Shoko Asahara, founder of the Aum Shinrikyo cult.

Asahara, whose real name is Chizuo Matsumoto, was sentenced to death in February 2004 after a jury found him guilty on all charges against him, including the 1995 sarin gas attack on the Tokyo subway system. He had been indicted on charges of murder and attempted murder in 13 criminal cases that resulted in the death of 27 people.