You are here: Home | Al Furqan | This business is not owned by a Scientologist

€¦ The Berry Beautiful Salon and Spa in Clearwater, Florida wants everyone to know the business is not owned or operated by Scientologists. 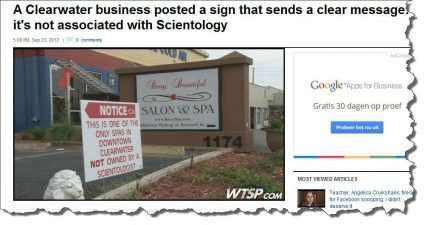 Spa not owned by a Scientologist

A sign in front of the business says, “Notice: This is one of the only spas in downtown Clearwater not owned by a Scientologist.”

The spa’s website makes it clear that, “In fact, we are, by definition, a Christian based business.”

“I do not want to be associated with them in any way. So, I felt the need to post a sign that stated just that,” said Travis Wilkinson, owner of Berry Beautiful Salon and Spa. […]

Many Clearwater residents and business owners feel that their town, the headquarters of the Church of Scientology Corporation, is under ‘occupation’ by the cult.

Downtown Clearwater is an occupied downtown. If you don’t believe me let me take you on a tour. You’ll see Scientology security guards (some on bikes), Scientology surveillance cameras (even in a city park!), motion sensors, a constant stream of Scientology buses and vans, and the ever-growing property accumulation of Scientology.

In court testimony a Scientology security worker said that his job is to monitor the security cameras for Scientology. There are, he said, over 100 such cameras in downtown Clearwater, some of them remote controlled with telephoto lenses [€¦]. The new Gas Alley Park on Cleveland Street has a Scientology security camera pointing at the benches in the park. What church needs 100 security cameras and motion sensors around their properites? Why would an organization that claims to be a typical member of the community be so paranoid about the rest of the community?

Any citizen in downtown Clearwater can be watched by Scientology’s security cameras and security staff.

And this section of the Wikipedia entry on Clearwater also goes a long way toward explained why many locals are not amused by the Scientology cult’s oppressive presence:

Clearwater is the headquarters of the Church of Scientology Corporation. Officially known in Scientology as Flag Land Base, they were founded in the late 1970s when an anonymous Scientology-founded group called “United Churches of Florida” purchased the Fort Harrison Hotel for $3 million. The citizens and city council of Clearwater did not realize that the building’s owners were actually the Church of Scientology until after the building’s purchase. Clearwater citizen’s groups, headed by Mayor Gabe Cazares, rallied against Scientology establishing a base in the city, but Flag Land Base was established nonetheless.[38] In response, the Church smeared Cazares with false sex allegations and a faked hit and run incident.[39] Concerns were further raised when it was revealed the purchases had been part of Project Normandy, a plan to take over the city by infiltrating government offices and media centers,[40][41] which came out as part of investigations into the Guardian’s Office’s dirty-tricks campaigns known as Operation Snow White.

€¦ Two goons who last year on behalf of the Church of Scientology engaged in extended harassment of ex-Scientology top executive Mark Rathbun (with their so-called Squirrel Buster team) are now suing the church for payments they say they have not received. 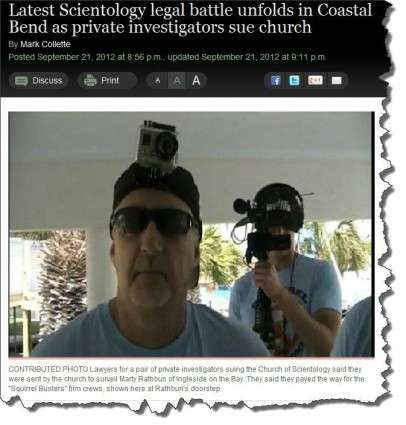 Two private investigators claim David Miscavige, the leader of the Church of Scientology, paid them $12million over the course of 24 years to spy on his former rival, along with other enemies.

The top-secret program gave Paul Marrick and Greg Arnold about $500,000 a year and sent them across the world in pursuit of Pat Broeker, who was briefly head of the church before being forced out, the men say.

They are now suing the church after the paychecks stopped rolling in.

The men claim the church violated a longstanding verbal contract to keep them employed for life.

The Broeker Operation was first revealed in 2009 when former church executives Marty Rathbun and Mike Rinder told the Tampa Bay Times that Miscavige wanted to know about Broeker’s every move after he continued his life outside the church. The lawsuit not only corroborates their story but fills in extraordinary details about the operation. […]

For years, the church has insisted that it doesn’t hire private investigators. It has said its attorneys sometimes hire them as part of standard litigation practice to protect the church’s interests.

But the lawsuit says Marrick and Arnold dealt directly with Miscavige’s staff, not attorneys, and that Miscavige feared Broeker might one day try to reclaim his position.

Scientology-watcher Tony Ortega, who recently left his position as Editor in Chief of the Village Voice, notes

While contract disputes often end in settlements, the lawsuit has the potential of bringing to a South Texas courtroom two men who rarely or never are seen in public. Jeffrey said that Broeker, who has remained out of sight since leaving Scientology after Hubbard’s death, may be called as a witness. And Miscavige, who has not given a television interview since talking to ABC’s Nightline in 1992, could be deposed.

Scientology increasingly has come under criticism as more former members and officials speak of church policies they say cause members to become separated from their families, devastated financially and subjected to mental and physical punishments. Rathbun’s tell-all reports, the bizarre antics of Scientology’s sweetheart celebrity, Tom Cruise, Janet Reitman’s investigation in her book “Inside Scientology,” and the stunts of the Squirrel Busters have heaped on the image problems.

“This whole patina of terror is losing its luster and people are not afraid of them anymore,” Rathbun said. The lawsuit, he said, “is a very audacious sort of move, and I think it’s a sign of the times.”

Yet Jeffrey said his clients have no desire to use the lawsuit as a platform to belittle the church.

“They don’t have any ax to grind with Scientology,” he said. “In particular, they never did anything illegal or that harmed anybody … They just wanted to retire.”

An archive of his articles on Scientology will remain available at The Village Voice. This one includes a list of the most significant articles on the subject.

€¦ Nigeria: a suicide car bomber attacked a Catholic church during Mass on Sunday, killing two people and wounding 45 others.

No group or individual claimed responsibility, but officials suspect Boko Haram, a radical Islamist sect of Islam that has been committing terrorist acts throughout Northern Nigeria since it was formed in 2002.

€¦ The Sydney Morning Herald has an article aboutÂ Harun Mehicevic ‘and his band of devoted followers.’

According to the paper

Sources within the Islamic community have described him as a “cult leader” and “charismatic but totally delusional”. They say he has gathered a multi-ethnic group of 20 to 30 young men around him, and they are fiercely loyal to him.

€¦ The Gospel of Jesus’ Wife? When Sensationalism Masquerades as Scholarship: Albert Mohler, President of the Southern Baptist Theological Seminary, puts recent reports about the alleged wife of Jesus in perspective.

[Karen] King and [Elaine] Pagels have both rejected traditional Christianity, and they clearly prefer the voices of the heretics. They argue for the superiority of heterodoxy over orthodoxy. In the Smithsonian article, King’s scholarship is described as “a kind of sustained critique of what she called the ‘master story’ of Christianity: a narrative that casts the canonical texts of the New Testament as a divine revelation that passed through Jesus in ‘an unbroken chain’ to the apostles and their successors — church fathers, ministers, priests and bishops who carried these truths into the present day.”

King actually argues against the use of terms like “heresy” and even “Gnostic,” claiming that the very use of these terms gives power to the forces of orthodoxy and normative Christianity. Nevertheless, she cannot avoid using the terms herself (even in the titles of her own books). She told Ariel Sabar of Smithsonian, “You’re talking to someone who’s trying to integrate a whole set of ‘heretical’ literature into the standard history.”

… A police helicopter and 60 riot police deployed Saturday in central Marseille to prevent any protests about anti-Islam cartoons, but only a single demonstrator turned out.

In November, 2011, Hebdo’s offices were been destroyed by a petrol bomb, a day after it named the Prophet Mohammed as its “editor-in-chief” for that week’s issue.

… A jail official in India’s Kishanganj district was served a show-cause for inviting a sorcerer to exorcise the soul of a prisoner who had died behind bars, official sources said on Saturday.

Seen anything that you think should be included in Religion News Briefs? Let us know