A pretrial ruling upholding a Washington state law that allows faith healing for Christian Scientists but not other religions will go unchallenged now that Greg and JaLea Swezey agreed to plea deals, their lawyer says.

As members of the Church of the First Born, the Swezeys believe in faith healing. They were accused of failing to call a doctor while their 17-year-old son died of a ruptured appendix, and they prayed for him to get better.

Before their trial, Okanogan County Superior Court Judge Chris Culp declined to dismiss their case after their attorneys argued that they were not being treated equally under the law. 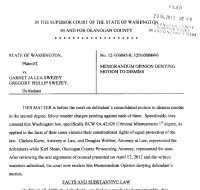 On Thursday, rather than face a retrial on manslaughter charges, JaLea Swezey pleaded guilty to third-degree criminal mistreatment on Thursday, and Greg Swezey signed papers agreeing to plead guilty to the same crime after two years, if he follows court orders and commits no felonies during that time.

Webber said by signing a plea deal, the Swezeys gave up their right to appeal the judge’s ruling. […]

A spokesperson for the Christian Science Church previously declined to define what it means to be a duly accredited practitioner.

Rita Swan, president of CHILD Inc., a national nonprofit group to that works to protect children from abusive religious and cultural practices, said Christian Science practitioners are not medically trained. She said while they are required to report child abuse and neglect to the state, the state Department of Social and Health Services does not include them in their list of mandated child abuse reporters.

Christian Science: Neither ‘Christian’ nor ‘Science’

Christian Science is neither ‘Christian’ nor ‘Science.’

Due to the belief that all is Spirit and matter is an illusion, Christian Science denies the reality of sickness and death. [source]

The unwillingness of many Christian Science parents to seek help from physicians for their critically ill children has led to many painful and unnecessary deaths and, increasingly, to legal actions that have become burdensome to the Church and its members.

As far as I know, no systematic, medically supervised study of the outcome of Christian Science healing has ever been performed. However, a recent study suggests that devout Christian Scientists, who rarely consult doctors, pay a high price for avoiding medical care. […]

Rita and Douglas Swan, whose 16-month-old son Matthew died of meningitis under the care of two Christian Science practitioners in 1977, are not surprised by these statistics. Angered by their experience, she founded CHILD, Inc., to work for legal reforms that can protect children from inappropriate treatment by faith healers. She and a colleague collected and reviewed the cases of 172 children who died between 1975 and 1995 when parents withheld medical care because of reliance on religious rituals They concluded

• 140 of the deaths were from medical conditions for which survival rates with medical care would have exceeded 90%. These included 22 cases of pneumonia in infants under two years of age, 15 cases of meningitis, and 12 cases of insulin-dependent diabetes.
• 18 more had expected survival rates greater than 50%
• All but three of the remainder would probably have had some benefit from clinical help.

Christians consider Christian Science to be, theologically, a cult of Christianity.

The Wenatchee World also reports that jurors had mixed reactions to the plea deal.

The jurors said they voted 10-2 in favor of convicting the Swezeys of second-degree manslaughter for failing to provide medical treatment to their son, Zachery, while he was dying of a ruptured appendix three years ago. Jurors heard that the Swezeys prayed by his bedside and called for elders of their Church of the First Born, which believes in faith healing, to anoint him with olive oil, but never called a doctor or ambulance.

The three jurors contacted Thursday said they deadlocked after nine hours of deliberation when one of the jurors who was against conviction refused to continue discussing the issue. […

In the end, a plea deal in Okanogan County’s faith-healing-murder charge was one of those cases where no one got what they wanted, yet the judge declared — and lawyers agreed — that justice was served.

“Sometimes, being a responsible parent means doing things you don’t necessarily like,” Superior Court Judge Chris Culp told the Swezeys after their plea deals were signed. “The point is that there is a responsibility here, and that’s what this case is about,” he added.

The judge said given the facts of the case, Prosecutor Karl Sloan was duty-bound to charge the Swezeys.

He said he didn’t feel a jail sentence was necessary. “My only hope is that the message now is clear about our duties and responsibilities as parents — that we do whatever is necessary to take care of our children.”

Before she was sentenced, JaLea Swezey asked the judge how she was supposed to determine when to call CPS if her daughter became ill.

“Does that mean every little thing?” she asked. “If (her daughter) has a cold, or skins her knee? I just don’t want to be found I’m not doing it properly,” she said.

After Sloan explained that he didn’t want to force the Swezeys to see a doctor for every ailment, Culp advised Swezey to “err on the side of caution,” and call the agency and describe her daughter’s condition just to get it on the record. If CPS advises she should see a doctor, she should do so.