One of the two remaining fugitive members of Aum Shinrikyo, the doomsday cult behind the 1995 nerve gas attack on Tokyo subways, was arrested Sunday, according to Japanese media reports.

Former senior Aum Shinrikyo cult member Naoko Kikuchi, 40, had been spotted in Sagamihara city, 30 kilometers (20 miles) southwest of Tokyo, and acknowledged who she was when approached by police, according to NHK TV and other media reports, citing investigative sources. She was wanted on charges of murder in the 1995 attack.

Police declined to confirm the reports.

Kikuchi, formerly a senior member of the doomsday cult, was taken into custody in Sagamihara, Kanagawa Prefecture, and transferred to the Metropolitan Police Department in nearby Tokyo, where she was arrested for murder and attempted murder in connection with the sarin attack.

Kikuchi, one of only two remaining Aum fugitives at large, is believed to have been part of the cult team responsible for producing the sarin nerve gas used in the subway attack, which killed 13 people and sickened more than 1,000.

Officers were tipped off by informers. When they approached the woman and asked if she was Kikuchi, she said “Yes”, NHK reported.

She was immediately transferred to the Tokyo metropolitan police department, NHK added.

The case follows the surrender of Makoto Hirata, 47, a former Aum member who gave himself up to officers at a police station in central Tokyo minutes before midnight on New Year’s Eve.

If the woman is confirmed to be Kikuchi it would leave only one person, Katsuya Takahashi, 54, still at large on the Aum wanted list. 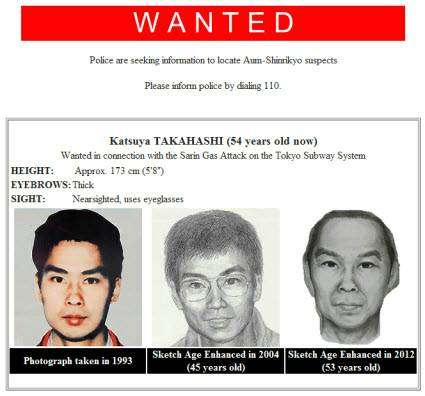 Nearly 200 Aum Shinrikyo members have been convicted in connection with the sarin attack and other crimes. Thirteen are awaiting execution.

Aum Shinrikyo began as a spiritual group mixing Hindu and Buddhist beliefs in the 1980s, but developed into a paranoid cult obsessed with Armageddon.

Cult leader Shoko Asahara is among those on death row.

Aum Shinrikyo reinvented itself as the Aleph group, which continues to operate as a spiritual group.

Ex-prosecutor: ‘Aum made preparations to topple the government’