You are here: Home | burka | Dutch government Going ahead with Burqa Ban

People wearing burqas, balaclavas or all-in-one motorbike helmets in public in the Netherlands will soon face fines. On Friday, government ministers voted to outlaw all clothing which covers the face.

The proposal bans all forms of face-covering clothing, whether a baklava or a burka, in public places, in buildings open to the public, in educational institutions, healthcare institutions and on public transport. A fine of up to 390 euros applies to violations of the ban.

“People must be able to look each other in the face and be recognisable to one another. The wearing of face-covering clothing does not fit in with the Netherlands’ open society, in which participation in social traffic is actually crucial,” the cabinet said Friday. 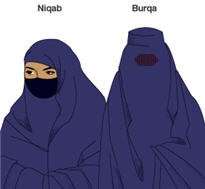 From the other side of the house, opposition Green Left MP Tofik Dibi put the measure against the background of the financial crisis in Europe. He said in a Twitter message dripping with irony, ‘Yo cabinet! While people are unsure about their own future and their kids’, lets focus on fining a handful of burqa wearers…’

However, many Dutch natives feel offended by a religious minority that largely rejects Dutch culture in favor of restrictive religious laws and interpretations that are at odds with the values and freedoms the Netherlands is known for.

Once seen as one of the world’s most tolerant nations, the Netherlands has turned increasingly conservative in recent years and is pushing immigrants more to fully assimilate into mainstream Dutch society.

Anti-Islam lawmaker Geert Wilders welcomed the decision in a tweet as “fantastic news.” Wilders’ popularity has soared largely due to his strident criticism of Islam, and he has long called for a ban on burqas and similar Islamic face veils known as niqabs.

Even so, the move is largely symbolic — only about 300 women in the Netherlands are believed to wear burqas and they are rarely seen in public.

Muslims, mostly immigrants from Turkey and Morocco, represent about 1 million of the 16.7 million Dutch population.

France and Belgium, which also have large Muslim populations, have already banned the wearing of face veils in public.

Like neighboring Belgium, the Dutch government cited security concerns as a reason for the ban and framed it as a move to safeguard public order and allow all people to “fully participate in society.”

While few Muslims in the Netherlands wear a Burqa or Niqab, both styles of face covering are viewed as signs of Islamic extremism.

Canada’s National Post is among the few publications that highlighted this aspect:

“Allowing a group to hide their faces while they are becoming members of our community is counter to Canada’s commitment to openness, equality and social cohesion,” Mr. Kenney explained.

Though controversial, the minister claims the ban has won widespread support. Speaking at a Muslim Canadian Congress event honouring his “courageous decision,” Mr. Kenney said polling shows that eight out of 10 Canadians agreed with the decision while only 14% were opposed.

“It is only a sign of respect for your fellow citizens, when you are pledging to them your commitment to live in a community with them, to show your face and who you are and that your pledge is heartfelt and authentic,” he said.

There was a tense moment at the event when a woman dressed in a burka approached the Minister and tore off the blue cloth to reveal she was actually author and women’s rights activist Raheel Raza. Writer Tarek Fatah also briefly wore a burka hand puppet.

“The niqab or burka is a political tool by Islamists who wish to segregate Muslims into religious ghettos, cut off from mainstream society,” said Farzana Hassan of the Muslim Canadian Congress. “Islamists consider women who do not cover their heads and faces, which constitutes the vast majority, as sinners and lesser Muslims.”