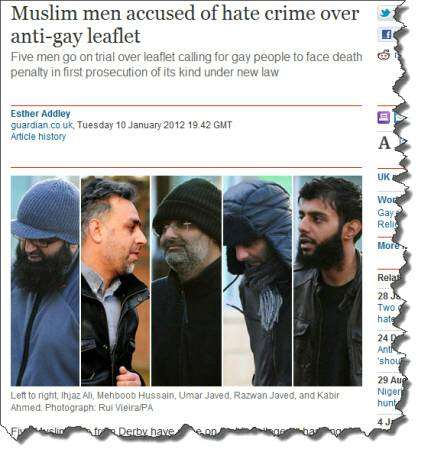 The men, Ihjaz Ali, 42, Mehboob Hussain, 45, Umar Javed, 38, Razwan Javed, 27, and Kabir Ahmed, 28, are accused of handing out to passersby and posting through letterboxes a leaflet calling for gay people to be given the death penalty, and stating that gay sex is a great sin that leads to hell.

They are accused of stirring up hatred on the grounds of sexual orientation, the first prosecution under new legislation which came into force in March 2010. They deny the charges.

A jury at Derby crown court heard that the five men had handed out a leaflet entitled The Death Penalty? outside and near the Jamia mosque in Rosehill Street, Derby, in July 2010, as well as putting it through nearby letterboxes. The pamphlet showed an image of a mannequin hanging from a noose.

The leaflet was one of several that the men were distributing, but the charges relate only to one called The Death Penalty? the jury heard.

Bobbie Cheema, opening the case for the prosecution, said: “The leaflets you will see are not educational or simply informative. They are, we suggest, threatening, offensive, frightening and nasty.”

A fourth leaflet, entitled Dead Derby, had been found but not distributed, she told the court. It described homosexuality as a “vile, ugly, cancerous disease” and stated: “Gay today, paedophile tomorrow?”

“A word of warning,” she told the jury of seven men and five women. “This case is not about, and we must not make it about, an interference with the defendants’ freedom of religion or freedom to express their religious views in an attempt to educate or inform people.

“The vast majority of Muslim, and indeed other religious people, or people with no religion but who have strong views about homosexuality, are able to express their views if they wish in a critical but lawful, moderate and self-controlled way. That’s one of the rights we have.”

The material was handed out in the street as well as posted through letterboxes.

The first, called Death Penalty?, claimed that Allah permitted the destruction of gay people and ‘the only question is how it should be carried out’.

The second, called Turn or Burn, featured the figure in a blazing lake with the warning that the decriminalisation of homosexuality was ‘the root of all problems’.

A third, GAY — God Abhors You —told of severe punishment for homosexuals. […]

Gay men who received the leaflets told the court they feared they had been personally targeted.

One witness, who cannot be named for legal reasons, said he was handed one leaflet in person and received three more in the post.

‘Being a gay man, I thought it was meant for me,’ he said. ‘I felt like I was being targeted. I thought it meant I was going to be burned or something like that.’

Another, who received two of the leaflets in the post, said: ‘I felt threatened. I wondered whether I would be getting a flaming rag through my letter box.’

The jury heard that in the weeks before the gay pride parade, Ihjaz Ali approached police about staging a protest against it.

Ali, who the prosecution say organised the distribution of the leaflets, showed officers a list of slogans intended for use on placards and literature. The slogans included ‘paedo gays, you will pay’, ‘turn forever or burn forever’ and ‘Adam and Eve, not Adam and Steve’.

His request was refused and he was later arrested on the back of the welter of public complaints about the leaflets.

Ali allegedly told the officers who questioned him that it was his duty to express laws laid down by Allah. […]

The maximum penalty for the offences is seven years in jail. […]

The trial, which is expected to last three weeks, continues.