Japanese investigators are set to question Aum Shinrikyo guru Shoko Asahara over the role Makoto Hirata, a former member of the cult who turned himself in to Tokyo Metropolitan Police on Dec. 31 after 17 years on the run, played in the abduction and death of a Tokyo notary office clerk in 1995, sources said Monday.

Asahara, 56, whose real name is Chizuo Matsumoto, is on death row for masterminding a series of heinous crimes. He is said to be suffering from a mental disorder and investigators are concerned he will not be able to answer their questions on the case.

Hirata, 46, was arrested Jan. 1 on suspicion of conspiring with Asahara and other Aum followers to abduct Kiyoshi Kariya in February 1995.

Hirata — who is also accused of conspiring to place the 68-year-old clerk in confinement and inject him with a chemical that is believed to have caused his death on March 1, 1995 — had been on the wanted list since May the same year. Kariya had a sister who had been in hiding as she tried to leave the cult.

Hirata claims that former AUM Shinrikyo cult member Yoshihiro Inoue instructed him to drive a car in the abduction case, but that he did not know about the plan to abducti Kariya. But according to the Daily Yomiuri some former senior Aum members have told investigators that Hirata attended planning meetings and must have therefore known about the abduction, contradicting Hirata’s statement to the police.

It is not clear whether Matsumoto, 56, also known as Shoko Asahara, will respond to questioning as no one has been able to understand him in over a decade.

But according to Kydoo Makoto Hirata says Asahara is merely feigning mental illness. 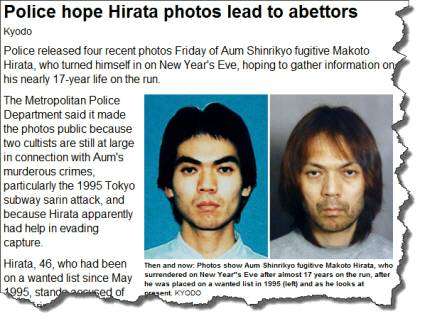 Meanwhile the news agency says police on Friday released four recent photos of Hirata in an effort to gather information on his life as a fugitive for nearly 17 years:

The Tokyo Metropolitan Police Department said it made the photos public as two other former cult members are still on the run in connection with a series of heinous crimes by the group, and due to the possible existence of people who had made it possible for Hirata to hide for such a long time.

Hirata has refused to talk much about how he spent nearly 17 years as a fugitive until he turned himself in to the Metropolitan Police Department (MPD) on New Year’s Eve.

The MPD suspects that Hirata was with a 49-year-old female cult follower sometime around 1996.

The woman, who served as a nurse for the cult, allegedly helped Hirata escape from police and hide, according to investigators. […]

Many other high-ranking members of the cult had been on the run with female followers. […]

“People tend to pay less attention to a man living with a woman and a couple can rent an apartment more easily than single people. In many cases, women worked to earn money to cover the men’s living expenses to help them hide,” [a high-ranking police officer explained].