Makoto Hirata, a former leading member of the AUM Shinrikyo cult who has been on the run for more than 16 years, turned himself in to police late Saturday, police said Sunday. 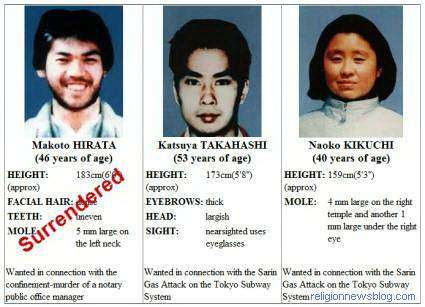 According to the Associated Press

A Tokyo metropolitan police official said Makoto Hirata, a member of Aum Shinrikyo, conspired with several other members in kidnapping a notary official in 1995 and causing his death. The victim, Kiyoshi Kariya, then 68, was the brother of a follower trying to quit the group. […]

Police say Hirata and other cult members kidnapped Kariya off a Tokyo street and confined him at the group’s tightly guarded commune at the foot of Mount Fuji. They allegedly used anesthetics on Kariya to get him to talk about his sister, who escaped from the group after being pressed to donate her land. Kariya died from a drug overdose, police said.

According to court testimony, cult members burned Kariya’s body in an incinerator inside the commune and disposed of the ashes in a nearby lake to destroy the evidence.

Hirata was quoted as saying that he turned himself in because he wanted a sense of closure after fleeing from the police for a long time. He was carrying a backpack and had tens of thousands of yen with him, they said.

On the allegation against him, Hirata has only admitted to driving the vehicle involved in the abduction, according to the police.

Hirata made no statements about where he had been hiding or about the cult founder Asahara, according to a senior officer of the Tokyo police.

He was one of three Aum members who went into hiding after the sarin attack in March 1995, which killed 13 people and injured thousands.

Naoko Kikuchi, 40, and Katsuya Takahashi, 53, are still at large.

Hirata, known to be skilled in shooting, is also suspected of being involved in a sniper attack in 1995 on the then national police chief who survived it, the reports said.

Hirata joined the cult in 1984 after graduating from university and was mainly tasked with guarding Asahara, a near-blind yoga master who attracted some 10,000 followers at the height of his popularity.

Asahara preached a blend of Buddhist and Hindu dogma mixed with apocalyptic visions, and developed an obsession with sarin gas, becoming paranoid that his enemies would attack him with it.

The cult wanted to disrupt police’s move to crack down on it and throw the capital area into confusion to enact the guru’s image of an apocalyptic war, according to prosecutors.

Sixteen people were arrested for the attack, with 13 of them, including Asahara, sentenced to death.

The country’s Supreme Court in late November rejected a final appeal against the death sentences.

Altogether some 189 Aum cultists have been put on trial over the various attacks carried out by the cult — whose ‘religious freedom’ was defended by a trio of U.S. cult apologists.

In January 2000 Aum Shinrikyo renamed itself Aleph (after the Sanskrit for ‘unlimited expansion’). At the time the group also distanced itself from its former leader, Chizuo Matsumoto (better known as Shoko Asahara), admitting he may be directly responsible for the gas attacks and other crimes committed by the cult’s members.

In addition the cult announced other changes, including the demand that followers reapply for membership and sign declarations that they will obey the law.

Skeptics noted that the changes came just before Japan’s government were to decide whether Aum Shinrikyo should come under supervision in accordance with a law to regulate organizations that have committed mass murder. One month later permission was granted to the Public Security Investigation Agency, and the cult has been under surveillance ever since.

Aleph is currently thought to have some 1,300 members.

Aleph and several splinter groups reportedly still idolize the cult’s founder, Shoko Asahara. Asahara has been on death row since his conviction in February 2004.

The largest of the splinter groups — each of which remain under surveillance as well — is Hikari no Wa (Circle of Rainbow Light). This group, believed to have some 250 members, was founded by former AUM Shinrikyo spokesman Fumihiro Joyu.