You are here: Home | Inside Scientology: The Money Machine

So says the St. Petersburg Times in its latest series of exposes covering the Church of Scientology:

Today’s Church of Scientology is an insatiable machine that aggressively separates parishioners from their money, according to dozens of former church insiders speaking out for the first time.

Scientology rings up astonishing sums: $100 million a year just from services sold in Clearwater, a minimum of $250 million since 2006 for the International Association of Scientologists, tens of millions for new church buildings called Ideal Orgs, and untold millions more from selling new volumes of church scripture.

Then there’s the massive and long-delayed Super Power building in downtown Clearwater, which the church has used as a magnet for at least $145 million in donations.

Scientology officials deny that the church coerces members, saying it is proud and fortunate to have generous parishioners.

Much of the money is made by aggressively hawking a collection of 18 volumes of books and 280 digitally enhanced audio lectures called “The Basics” — all written and recorded by the cult’s founder, L. Ron Hubbard.

Selling the scriptures, at $3,000 a set, has become an obsession within the church, the Times reports in an article titled, “Pervasive pitch: Scientology book and lecture series, ‘The Basics,’ unleashes a sales frenzy”

When “The Basics” package was introduced, in June 2007, Scientology leader David Miscavige said

“If the reality hasn’t sunk in yet, it soon will. This is the event you have been waiting for €¦ in terms of your past, present and future as a Scientologist.”

For the 53-year-old Church of Scientology, this was a “golden age of knowledge,” Miscavige said. […]

After Miscavige’s announcement, the church issued an “all hands” directive: Staffers everywhere must help disseminate the important new scriptures.

Driven by their bosses’ demands and the threat of punishment, Scientology staffers became hard-sell pitchmen, relentlessly pushing the pricey Basics sets on other believers.

Former church insiders, including those who sold and those who bought, said the Basics campaign consumed the whole organization, derailing spiritual pursuits and alienating Scientologists who grew weary of the church going for their wallets.

The article is part of the Times’ current special report on the Church of Scientology: The Money Machine. 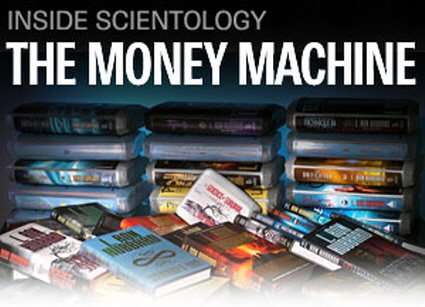 Inside Scientology: The Money Machine is the ninth series of hard-hitting investigative report on Scientology published by the St. Petersburg Times.