During the trial of Timothy and Rebecca Wyland for the medical neglect of their now 18-months-old daugher, a doctor testified that the baby girl may have gone blind if she had not been taken away from her parents. 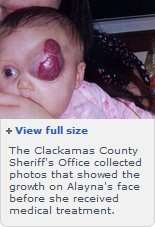 said the girl has permanent developmental damage to her eye and may require surgery.

In court, the jury was shown images of baby Alayna Wyland who suffered from a buildup of blood vessels around her left eye during the first few months of her life. […]

The state took Alayna into custody almost immediately, having had experiences with Followers of Christ Church members in the past. At the time, case workers feared the consequences.

“She could go blind in that eye. She could lose the eye completely. Her face could continue to deform,” said case worker John Faber.

“The diagnosis I came to is ‘medical neglect,'” he said.

Timothy and Rebecca Wyland pleaded with child-welfare workers last summer for permission to take their daughter, Alayna, to a doctor and keep her out of state custody.

The Oregon Department of Human Services refused the request and, on June 29, brought Alayna to a hospital, where she was treated the infant for a growth that covered her left eye and extended around the eyeball leaving her left eye on the verge of blindness. A doctor who examined Alayna said she suffered from medical neglect.

The way DHS responded to the Wylands’ pleas became the focus of testimony during the second day of their trial in Clackamas County Circuit court. The Wylands, members of the Followers of Christ, an Oregon City faith-healing church, are charged with first-degree criminal mistreatment for failing to provide medical care for Alayna.

Defense attorneys Mark Cogan and John Neidig maintain that DHS took custody of the girl under the guise that she needed emergency medical care and refused to allow the Wylands to take her to a doctor on their own. But before the girl saw treating physicians, defense attorneys contend, she was evaluated by pediatricians who specialize in child abuse.

The defense attorneys on Tuesday began developing their argument that the Wylands are the victims of an overly aggressive bureaucracy that snatched heir daughter. The attorneys also raised the issue of religious discrimination. Neidig pointed out that DHS reports identified the Wylands as members of the Followers of Christ and said the agency may have targeted the couple for their affiliation.

Authorities would be negligent if they ignored the cult’s destructive practices.

Last week the Oregon Senate joined the House in passing a measure sparked by the Followers of Christ Church deaths.