You are here: Home | Family Radio | False prophet Harold Camping had no Plan B

As predicted, Harold Camping’s prophesied doomsday has come and gone without any of his predictions coming true. Again.

Instead of a series of earthquakes hitting successive countries at 6pm local time and heralding The Rapture — in which millions of the Faithful would ascend to heaven before the Second Coming of Christ — planet Earth simply carried on and, mostly, kept calm. […]

The non-event was a great disappointment to hundreds of followers of a hitherto obscure California-based religious group called Family Radio, which had lavished millions of dollars on a worldwide advertising campaign proclaiming yesterday as Judgment Day.

The group is centred on the teachings and broadcasts of prophet Harold Camping, an 89-year-old self-styled expert in the scriptures who told his followers that his interpretations of the Bible had uncovered the true date of the end of the world. Camping, who lives in the northern California town of Alameda, has previous form on this. He got the date wrong in 1994 when he said the world would end that year, and later explained its continued existence by saying he had made a mathematical error.

But what made this prediction different was the lavish spending that accompanied it. Camping and his followers spent more than $100m worldwide on billboards and posters, financed by the sale and swap of radio stations. Advertising popped up across America and the globe from Iraq to Lebanon to Israel to Jordan, the Philippines to Vietnam, where thousands of the Hmong ethnic hill tribe gathered together on the Thai border in anticipation of the event. The campaign was backed up by Camping’s radio show, which can be heard worldwide, and a website that featured, naturally, a countdown clock. Yesterday that clock was at zero underneath the banner headline: “Judgment Day: the Bible guarantees it.” 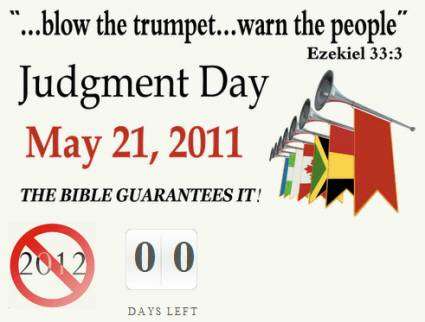 The Los Angeles Times says that when the rapture events Camping had predicted did not arrive on schedule he called his daughter, Sue Espinoza:

On Saturday morning, Espinoza, 60, received a phone call from her father, Harold Camping, the 89-year-old Oakland preacher who has spent some $100 million — and countless hours on his radio and TV show — announcing May 21 as Judgment Day. “He just said, ‘I’m a little bewildered that it didn’t happen, but it’s still May 21 [in the United States],'” Espinoza said, standing in the doorway of her Alameda home. “It’s going to be May 21 from now until midnight.”

If history is any guide, Camping — like countless other false prophets and cult leaders before him — will simply come up with a silly explanation, a revised doomsday date, and renewed calls for financial donations.

Meanwhile, thousands of misguided Christians — lacking Bible knowledge and spiritual discernment and thus easy prey for false teachers — had reportedly given up their jobs, sold their homes or spent their life savings to purchase billboards and other forms of advertising hawking Family Radio’s silly predictions.

Matt Tuter, the longtime producer of Camping’s radio and television call-in show, said Saturday that he expected there to be “a lot of angry people” as reality proved Camping wrong.

Tuter said Family Radio’s AM station in Sacramento had been “severely vandalized” Friday night or Saturday morning, with air conditioning units yanked out and $25,000 worth of copper stripped from the equipment. He thinks it must have been an angry listener. He was off Saturday but planned to drive past the headquarters “and make sure nothing’s burning.”

Camping himself, who has given innumerable interviews in recent months, was staying out of sight Saturday. No one answered the door at his Alameda home, though neighbors said he was there.

By late afternoon, a small crowd had gathered in front of Camping’s Oakland headquarters. There were atheists blowing up balloons in human form, which were released into the sky just after 6 p.m. in a mockery of the rapture. Someone played a CD of “The End” by the Doors, amid much laughter.

There were also Christians, like James Bynum, a 45-year-old deacon at Calvary Baptist Church in Milpitas, holding signs that declared Harold Camping a false prophet. He said he was there to comfort disillusioned believers.

“Harold Camping will never hand out poisoned Kool-Aid,” Bynum said. “It’s not that kind of a cult. But he has set up a system that will destroy some people’s lives.”

Camping seemed entirely genuine in his beliefs, enough to spend a small fortune promoting them. While others may be making money out of believing in Doomsday, Camping is not one of them. Many experts have worried about the psychological impact on his followers who are suddenly confronted with the collapse of their belief system. Some Christian pastors planned to gather outside Family Radio to counsel any distraught members who showed up wondering why they — and the world — were still there.

Camping himself admitted he had pretty much staked everything on his fervently held belief. “There is no plan B,” he told Reuters late last week. Which is a shame. As the day progressed in California last night with no global mega-quake in sight, he and his followers needed one.

Theologically, Harold Camping’s Family Radio is a cult of Christianity.