Paul Haggis is making headlines around the world for denouncing the Church of Scientology, but the Oscar-winning director doesn’t think the rebuke will affect his career, the Canadian Press reports.

Rather, the Canadian filmmaker says he has felt a personal blow since speaking out against the controversial religion, which boasts several influential Hollywood devotees, including Tom Cruise and John Travolta.

A lengthy New Yorker article [hit the stands] Monday detailing Haggis’s complaints with the church, which the 57-year-old filmmaker left in 2009 after nearly 35 years and now denounces as a cult.

During a visit to Toronto on Wednesday, the director said he’s lost one friend since the story broke online, in addition to several others who have turned their backs on him since he left the church.

“It’s had a bit of an impact — a lot of people aren’t speaking to me anymore, but it’s a personal impact,” Haggis said of fallout from his condemnation of the group, founded by L. Ron Hubbard in 1952.

The Church of Scientology is viewed by many as a destructive cult, in part due to its ‘disconnection’ policy. 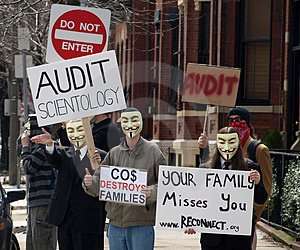 Disconnection is a practice in Scientology, in which a Scientologist severs all ties between themselves and friends, colleagues and/or family members that are deemed to be antagonistic towards Scientology.

In the New Yorker article, authored by investigative journalist Lawrence Wright, Haggis predicts that his revelations regarding the Church of Scientology will not be without consequence:

“My bet is that, within two years, you’re going to read something about me in a scandal that looks like it has nothing to do with the church.”

Those familiar with the cult know just what he means. The Church of Scientology has a lengthy history of hate- and harassment activities — unethical behavior based on the writings of cult founder L. Ron Hubbard. Hubbard condoned and encouraged such behavior with his dead agenting and fair game policies. This is one reason why Apologetics Index, publishers of Religion News Blog, labels the Church of Scientology as a hate group.

One of Scientology’s victims was Paulette Cooper. The Scientology Lies website explains:

Paulette Cooper is a journalist who suffered extraordinary harassment after writing an article and a book about Scientology. FBI raids of Scientology offices turned up evidence of conspiracies against Cooper, including Scientology’s attempt to frame her for sending bomb threats – threats which Scientology operatives sent themselves in order to get Cooper jailed.

Cooper’s story, Looking over my shoulder, The Inside Account of the Story That Almost Killed Me, provides further details.

Her book, The Scandal of Scientology, can be read online.

Lawrence Wright, who authored Paul Haggis profile, is working on a book about the controversial church and Haggis’s lengthy involvement.