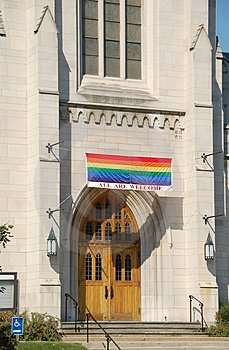 Osteen spoke about homosexuality and said he believed it to be a sin in his eyes, Houston TV station KTRK reports.

“I’m not one of those that are out there to bash homosexuals and tell them that they’re terrible people and all of that. I mean, there are other sins in the Bible too. I think sometimes the church — and I don’t mean this critically, but we focus on one issue or two issues, and there’s plenty of other ones. So I don’t believe homosexuality is God’s best for a person’s life,” Osteen said on the show.

What is surprising about this is that Joel Osteen is known for preaching what many Christians refer to as ‘Chritianity Lite.’

Osteen, as a rule, does not do a lot of preaching about sin, preferring an uplifting message that emphasizes a self-help approach to religion that in effect God wants his children to do better in life. This approach to faith that does not emphasize concepts such as sin, repentance and redemption has proven to be controversial in the evangelical community

It’s almost sad to see Osteen’s defensiveness and confusion when it comes to this issue. As he said, he didn’t go to seminary, so he didn’t get the benefit of doing any close reading of the scriptures in their original Greek and Hebrew, or else he’d understand that the words used in these passages do not connote homosexuality as we understand it today, but instead describes behaviors associated with idol worship, or sexual abuse.

Despite having close friends who are gay, Osteen insists on painting gays and lesbians as living some odd, out of the mainstream lifestyle when he says they “live that kind of life.” I live in a house in a suburb where I have four dogs, two cats, a mortgage, a utility bill that makes my eyes pop, and I have to wash dishes and take out the trash. I go to church every Sunday (I’m the pastor, I kind of have to be there), and I kiss my wife when she leaves the house and when she comes home. It is, to quote Osteen, very much my best life now.

Chellew-Hodge serves as the pastor ofÂ Jubilee! Circle United Church of Christ in Columbia, S.C. She is alsoÂ the author ofÂ Bulletproof Faith: A Spiritual Survival Guide for GayÂ and Lesbian Christians.

From an evangelical, orthodox Christian perspective, homosexuality is immoral and sinful. However, many homosexuals who also proclaim to be Christians believe the Bible is misinterpreted when it comes to its denouncement of homosexuality.

Various religious groups – including some Christian denominations – differ in their views regarding homosexuality.