The Church of Scientology won an important victory in federal court Thursday when a judge dismissed two lawsuits that accused the church of labor law violations, human trafficking and forced abortions.

Claire and Marc Headley, who left Scientology in 2005, said the church controlled them with threats of harsh punishment and other tactics that prevented them from leaving the Sea Organization, Scientology’s religious order.

But U.S. District Judge Dale S. Fischer ruled that the Sea Org is protected by the First Amendment’s guarantee of free exercise of religion.

The judge ruled that the Headleys performed religious duties and that the Sea Org falls within the “ministerial exception” commonly granted to religious groups in employment cases. The exception prevents the court from prying into the church’s internal workings to get to the bottom of the Headleys’ allegations.

Continuing the case, the judge wrote, would require the court to analyze “the reasonableness of the methods” used to discipline Sea Org members and to prevent them from leaving. As for Claire Headley’s allegation that she was forced to have two abortions, Fischer said the court would have had to review Scientology’s doctrine prohibiting Sea Org members from raising children.

“Inquiry into these allegations would entangle the court in the religious doctrine of Scientology and the doctrinally motivated practices of the Sea Org,” wrote Fischer, a judge in the Central District of California.

The church did not return calls seeking comment on the ruling.

The Headleys said that the blanket dismissals surprised them, and they plan to appeal.
[…more…]

This article is part of the St. Petersburg Times‘ ongoing series of investigative reports on Scientology. 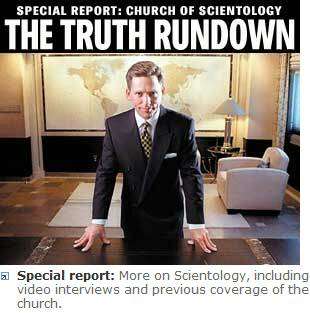 Joe Childs is Managing Editor/Tampa Bay. He has supervised the Times’ coverage of Scientology since 1993. He can be reached at childs@sptimes.com.

Thomas C. Tobin is a Times staff writer who has covered the Church of Scientology off and on since 1996. He can be reached at tobin@sptimes.com.

Prior Times coverage started in 1975, when the church first came to Clearwater, through last year’s investigative reports, “The Truth Rundown,” an examination of life inside Scientology, including former executives who said they were physically abused by church leader David Miscavige.

• Marc Headley is the author of Blown for Good: Behind the Iron Curtain of Scientology
• The Truth Rundown — The St. Petersburg Times’ series of special reports on the Scientology cult includes additional articles, prior coverage and video reports
• What you should know about Scientology — Apologetics Index’s consumer alert
• Cult FAQ — Frequently Asked Questions about Cults