You are here: Home | Falun Gong | US ‘to give $1.5m to Falun Gong internet freedom group’

A Falun Gong-linked group that promotes internet freedom says the US state department has offered it $1.5m, in a move condemned by Chinese officials.

Shiyu Zhou, of the Global Internet Freedom Consortium (GIFC), told the BBC the funding had been offered last week.

China’s Washington embassy said China was opposed to the US helping GIFC as it was run by Falun Gong – a spiritual movement that is banned in China. 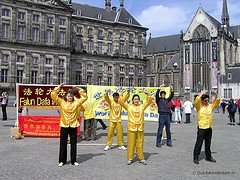 A state department spokesman told the BBC news of the grant was “premature”.

“We’ve not finalised agreement on the current round of funding and no final decisions have been made,” AFP news agency quoted spokesman Philip Crowley as saying.

The Washington Post newspaper earlier reported that a state department official had confirmed the offer to GIFC, whose Freegate and Ultrasurf software allows users to circumvent government-imposed internet controls around the world.

The controversy comes as the first US-China human rights talks in two years are set to resume in Washington.

The question of China’s internet censorship is expected to be among issues raised during discussions.

Wang Baodong, a spokesman for the Chinese embassy in the US capital, said he believed his government would “raise serious representations” with its US counterparts on the issue of the Falun Gong.

“GIFC is an organisation run by elements of the Falun Gong cult, which is bent on vilifying the Chinese government with fabricated lies, undermining Chinese social stability and sabotaging China-US relations,” he said.

“We’re strongly opposed to the US government providing whatever assistance to such an anti-China organisation.”

He said China’s regulation of the internet was in line with its laws and those of many other countries, and was supported by the vast majority of its people.

Falun Gong, which combines meditation with Buddhist-inspired philosophy, has been banned in China since 1999 for carrying out “illegal activities”.
[…more…]

• The Falun Gong movement was found in 1992 by Chinese martial arts master Li Hongzhi. In July 2001 TIME Asia wrote, “Li’s rambling dissertation, Zhuan FalunOff-site Link, has only added to accusations that Falun Gong is a cult. Li writes he can personally heal disease and that his followers can stop speeding cars using the powers of his teachings. He writes that the Falun Gong emblem exists in the bellies of practitioners, who can see through the celestial eyes in their foreheads. Li believes ”humankind is degenerating and demons are everywhere”-extraterrestrials are everywhere, too—and that Africa boasts a 2-billion-year-old nuclear reactor. He also says he can fly.”