Two die at US spiritual retreat

Two people have died and 19 others were taken to hospital after being overcome while in a sauna-like room at a spiritual retreat in Arizona.

A sauna-like sweat lodge at an Ariz. resort was meant to provide spiritual cleansing for the 64 people crowded inside. Authorities are trying to figure out how 2 died after nearly 2 hours inside the structure covered with tarps and blankets. – Associated Press

Police said 64 people were inside a so-called “sweatbox” at the Angel Valley resort for up to two hours before many of them became ill.

The pair who died were a middle-aged man and woman, police said.

Investigators are speaking to staff and guests and carrying out toxicity tests in an effort to find out what happened.

The 70-acre retreat near the town of Sedona, about 115 miles (185km) north of Phoenix, offers holistic treatments and spiritual retreats in a natural setting, according to its website.

The resort offers a wide range of treatments from massage to colon cleansing, healing carried out by harnessing the consciousness of a dolphin, or “vortex experiences”, in which participants “experience our human energy system interacting with the earth”.

Local TV images showed the “sweatbox” to be a dome-shaped frame covered by tarpaulins and blankets.

During the sweatbox experience, the tent was gradually filled with steam generated by pouring water on to fire-heated rocks brought inside the dome.

The sweatbox has traditionally been used as a ceremonial sauna in rituals practised by some Native American cultures.

The intense experience can be dangerous to people with pre-existing medical conditions or if the sweatbox is poorly constructed or badly managed.
[…]

Shortly after 5 p.m. Thursday, a man and a woman, reportedly in their 50s, lapsed into unconsciousness during a simulated Native American sweat-lodge purification ceremony led by a self-help guru and inspirational speaker at a Sedona retreat.

They were pronounced dead at Verde Valley Medical Center, and 19 others were hospitalized for as-yet-undetermined causes. All but four have been released. One remained in critical condition and three in fair condition Friday at Flagstaff Medical Center.

But the dangers, although rare, can include heat-induced illnesses, asphyxiation from carbon-monoxide poisoning and exploding rocks.

Autopsies were to be conducted on the deceased Friday afternoon. Blood samples were to be checked for poisons, and investigators were looking into the activities, foods and medical histories of all involved.
[…]

According to D’Evelyn and other witnesses, 64 people were taking part in the sweat-lodge ceremony, which lasted about two hours and was being hosted by James Arthur Ray, an author and spiritual self-help entrepreneur.
[…]

The ritual in sweat lodges is helpful in restoring balance and changing people’s attitudes and self-image, said Joseph Bruchac, author of “The Native American Sweat Lodge: History and Legends.”

People have died in sweat lodges in the past. They were either sick tribal elders who voluntarily stayed until they died or people who were in poor health.

“The sweat lodge needs to be respected,” Bruchac said. “When you imitate someone’s tradition, and you don’t know what you are doing, there’s a danger of doing something very wrong.”

The victims were attending the ceremony during the final day of a five-day program called “Spiritual Warrior,” which Ray has conducted at the resort annually since 2003. Ray’s Web site lists the cost for next year’s program at $9,695 per person. 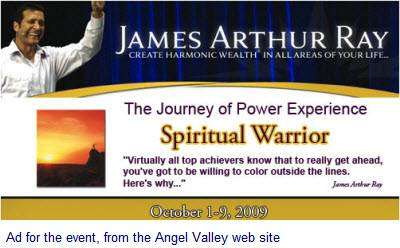 Ray’s program brochure promises participants will push themselves past their “self-imposed and conditioned borders” and “learn (and apply) the awesome power of ‘integrity of action.’ ” It describes the sweat lodge as “a ceremonial sauna involving tight, enclosed spaces and intense temperatures.”

Ray, a frequent guest on TV talk shows, calls himself “a personal-success strategist,” and his Web site details a sampler of international spiritual philosophies that he has fused into his program.

His book, “Harmonic Wealth,” contends that one can become a millionaire through spiritual study.
[…]

The resort founders, Michael and Amayra Hamilton, would not comment.

Sedona is an international mecca for New Age beliefs and purportedly the site of numerous “vortexes,” or natural energy confluences thought to enhance spirituality and well-being.
[…]

He said the ceremonies he attends usually last an hour and a half and include songs and prayers. Their purpose is to spiritually cleanse your mind, body and spirit. Many New-Age healers have adopted the practice with the intent of achieving the same goals.

However, Native Americans who spoke with CBS 5 said the “sweat lodge” at Angel Valley was larger than normal.

Moreno said he has never been to a lodge that has held more than 20 people.
[…]

Native Americans said attending their sweat lodge is free and that it would be uncommon to charge for a ceremony.
[…]