You are here: Home | no religion | Nones: people with ‘no religion’ gaining on major denominations

People with ‘no religion’ gaining on major denominations

Americans who don’t identify with any religion are now 15% of the USA, but trends in a new study shows they could one day surpass the nation’s largest denominations — including Catholics, now 24% of the nation.

American Nones: Profile of the No Religion Population, to be released today by Trinity College, finds this faith-free group already includes nearly 19% of U.S. men and 12% of women. Of these, 35% say they were Catholic at age 12.

If Nones, now 22% of all adults ages 8 to 29, continue to gain among young adults, to draw more people “switching out” from denominations and to replace more religious older people, researchers forecast one in five Americans will be Nones in 20 years.

While the numbers portend a dramatic change for the American religious scene—”religious nones” accounted for just 8 percent of the population in 1990—the United States is not poised adopt the anti-religious posture of much of secularized Europe.

That’s because American religious nones tend to be religious skeptics as opposed to outright atheists. Fewer than ten percent of those identifying with no religious tradition call themselves atheists or hold atheistic beliefs, according to the new study.

As it has grown larger, the no religion or None population is no longer a fringe group and the “None” choice in terms of (ir)religious identification is now attracting wide swaths of Middle America. 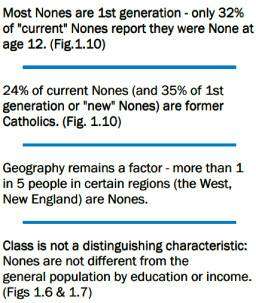 As a result Nones are coming to resemble the U.S. general population in terms of their marital status, educational attainment, racial/ethnic makeup, and income. Yet compared to the general U.S. population they are still disproportionately male, younger, and more likely to be Westerners and political independents.

This report reveals features of the Nones that were not widely recognized before. There is a variety of belief in God among the Nones, ranging from theism to atheism, though the largest proportion (59%) is agnostic or deist. Nones are not particularly superstitious or partial to New Age beliefs.
[…]

The most important and statistically significant finding is that American women are more religious and less secular than men in their belonging, belief and behavior. Whereas 19% of American men are Nones, only 12% of women are Nones. This is the biggest differentiator of the religious and non -religious populations and is the one social factor that has not narrowed since 1990. Women are not only less likely to switch out of religion than men but are also less likely to remain non-religious when they are born into a non-religious family. Moreover, even when they self-identify as Nones, women are less likely to be atheists and to take hard skeptical positions than men. These gender differences are functioning as a brake on the growth of the Nones and the secularization process in the U.S. Whether the gender differential is due to nurture or nature needs to be investigated further.

• American Nones: Profile of the No Religion Population