You are here: Home | burkini | Burqini banned in Italian town

Muslim women have been banned from wearing the body-concealing swimming costume known as a burqini in the northern Italian town of Varallo Sesia, according to a report.

Women wearing the garment, made up of a veil, a tunic and loose leggings, face a fine of ‚¬500 ( £430) if they are spotted at swimming pools or rivers, the ANSA news agency reported.

The anti-immigration mayor of the northern Piedmont town said: “The sight of a ‘masked woman’ could disturb small children, not to mention problems of hygiene.

“We don’t have to be tolerant all the time,” Gianluca Buonanno said.

Justifying the move, Mr Buonanno added: “Imagine a western woman bathing in a bikini in a Muslim country. The consequences could be decapitation, prison or deportation. We are merely prohibiting the use of the burqini.”
[…more…]

Just last week a French Muslim wearing a burkini was banned from a Paris swimming pool for similar reasons:

The woman, identified only as Carole, was making her third outing in a burkini to the town pool at Emerainville, on the eastern outskirts of Paris, when the chief lifeguard ordered her to leave. 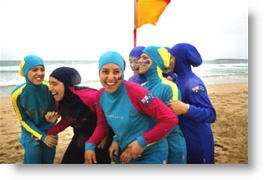 She was said to be breaking hygiene rules, but her ejection has become the latest episode in a battle between fundamentalist Muslims and a state that has banned head-cover from schools and may curb face-covering in public.

Carole accused the pool officials of illegal discrimination and went straight to the police and the media. “Quite simply, this is segregation,” she said. “I will fight to try to change things. And if I see that the battle is lost, I cannot rule out leaving France.”

The police refused to accept the complaint on the grounds that the lifeguard was just enforcing a rule that applies at all French public pools. Women must wear swimsuits and men must wear brief trunks rather than shorts, which are said to be more likely to harbour bacteria.

Carole, who was born in a traditional French family and converted to Islam at the age of 17, said she bought her attire on holiday in Dubai. The burkini, designed by Aheda Zanetti, a Lebanese-Australian, has become a hit in the Gulf and caused trouble in public pools in Europe and North America.
[…more…]

In recent years, local politicians in some areas have protested at proposed women-only swimming hours as an affront to the French republic, where everyone is equal.

When a town in Rhone-Alpes ran a trial women-only swimming session at a public pool last year, a local councillor from Nicolas Sarkozy’s ruling centre-right UMP party denounced it as the takeover of a secular, republican public space for religious reasons.

A parliamentary committee is currently considering whether to introduce a law to ban women in France from wearing full Islamic veils in public places after a petition from 50 MPs calling for restrictions on veils with face coverings.

The communist MP Andre Gerin, who heads the parliamentary committee, said the woman’s burkini swimsuit was “ridiculous” and “clearly a militant provocation”. He said a political agenda was behind such clothing and his committee would look at “fundamentalist pressures” encroaching on sporting dress codes in France.
[…more…]