You are here: Home | Atheism | Atheists advertise on London Buses: There is probably no God…

For Nonbelievers, Reassurance on Wheels

LONDON, Oct. 21 — British atheists announced Tuesday a high-profile advertising campaign to put posters on London buses that say: “There is probably no God. Now stop worrying and enjoy your life.”

By Tuesday night, as many as 3,400 donors had given about $80,000 on a Web site set up to take contributions to fund the ads. The money arrived along with messages that ranged from witty to nasty, summed up by one from a donor who gave 25 pounds ($42): “Hoorah for the non-believers!”

“We wanted it to be a positive message,” said Hanne Stinson, chief executive of the British Humanist Association, which plans to advertise on buses starting in January. “It’s about telling people that it’s okay if you don’t believe in God. If it raises a smile, too, good.” 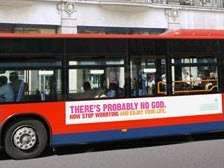 While the vast majority of Britons identify themselves as Christians, only a small percentage attend services regularly. Atheism is far more popular, and socially and politically accepted, in Britain than in the United States.

Many people who do not believe in God call themselves humanists or secularists. The British Parliament has an active and growing group of legislators who describe themselves as humanists.

One of the world’s most outspoken and provocative advocates of atheism, Oxford University Prof. Richard Dawkins, best-selling author of “The God Delusion,” is a member of the humanist association and pledged to personally match donations up to 5,500 pounds (about $9,300), Stinson said.

“This campaign to put alternative slogans on London buses will make people think — and thinking is anathema to religion,” Dawkins is quoted as saying on the Web site.

The Church of England issued a statement Tuesday defending the humanists’ right to express their views but disagreeing with their message. “Christian belief is not about worrying or not enjoying life,” it said. “Quite the opposite: our faith liberates us to put this life into a proper perspective. Seven in ten people in this country describe themselves as Christian and know the joy that faith can bring.”
[…]

The idea for an atheist ad campaign first surfaced in June, as a suggestion by television comedy writer and journalist Ariane Sherine in a column in the online version of the Guardian newspaper. Sherine noted that ads running on the London buses at the time directed people to a Web site that declared that those who do not believe in God will spend “all eternity in torment in hell.”

The humanist association agreed to take on the project. The bus ads are designed to tell atheists that they will not burn forever in the “lake of fire” described on the religious Web site, Stinson said. “It’s about reassurance.”

The atheist posters are the idea of the British Humanist Association (BHA) and have been supported by prominent atheist Professor Richard Dawkins.

The BHA planned only to raise £5,500, which was to be matched by Professor Dawkins, but it has now raised more than ?36,000 of its own accord.
It aims to have two sets of 30 buses carrying the signs for four weeks.

As the campaign has raised more than anticipated, it will also have posters on the inside of buses as well.

The BHA is also considering extending the campaign to cities including Birmingham, Manchester and Edinburgh.

Professor Dawkins said: “Religion is accustomed to getting a free ride – automatic tax breaks, unearned respect and the right not to be offended, the right to brainwash children.

“Even on the buses, nobody thinks twice when they see a religious slogan plastered across the side.

“This campaign to put alternative slogans on London buses will make people think – and thinking is anathema to religion.”
[…]

But Stephen Green of pressure group Christian Voice said: “Bendy-buses, like atheism, are a danger to the public at large.

“I should be surprised if a quasi-religious advertising campaign like this did not attract graffiti.

“People don’t like being preached at. Sometimes it does them good, but they still don’t like it.”

However the Methodist Church said it thanked Professor Dawkins for encouraging a “continued interest in God”.

Spirituality and discipleship officer Rev Jenny Ellis said: “This campaign will be a good thing if it gets people to engage with the deepest questions of life.”

She added: “Christianity is for people who aren’t afraid to think about life and meaning.”