The pastor of a Christian motorcycle club pleaded not guilty Thursday to felony weapons and gang charges in a case that hinges on whether he heads a church ministry or an outlaw biker gang.

The charges stem from a July bar fight in Newport Beach between the Set Free Soldiers and the Hells Angels in which two Hells Angels were stabbed. In a predawn raid in August, authorities seized dozens of weapons and thousands of rounds of ammunition at four homes owned by Set Free on Archer Street in Anaheim.

Police and prosecutors said the 25-year-old group has evolved into a criminal motorcycle gang in recent years, but Set Free maintains it is a Christian ministry that helps rehabilitate ex-convicts and recovering drug addicts.

On its website, Set Free Soldiers describes itself as “a group of men who love Jesus and love to ride hard. We are not your normal motorcycle club. Some say we are too good for the bad guys, and too bad for the good guys.”
[…]

The court rejected the prosecution’s request to bar Aguilar from associating with members of Set Free outside his immediate family, but did order that members of the group could not possess “dangerous or deadly weapons.” 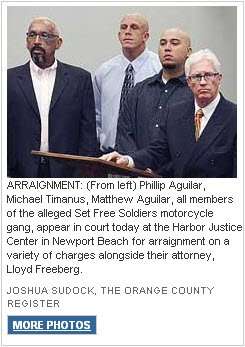 The search stems from a barroom brawl with members of the Hells Angels motorcycle gang on July 27 at a Newport Beach restaurant, Blackie’s by the Sea. Two Hells Angels members were stabbed and Phillip Aguilar was charged with attempted murder.

Immediately after the fight, 11 people, 10 of them Set Free members, were arrested, and seven were charged with attempted murder. The attempted murder charges were later dropped.

In the search, more than 150 officers fanned out and confiscated hundreds of items, including clothing and expensive cars and motorcycles.

Thirty years ago, Aguilar was addicted to heroin. Aguilar now preaches to recovering drug addicts in the back yard of one of his Archer Street properties.

Phillip Aguilar’s attorney, Doug Myers, would not allow his client to speak about the allegations. But the lawyer said that so far he has not found any evidence of gang activity among the Set Free Soldiers.

“In our view, it’s just not a criminal street gang,” Myers said.

The three are scheduled to appear in court again Dec. 4.