The date is etched in blood in Utah and Mormon church history and, on a more intimate level, the family trees of people like Karen Maxwell, a mother of eight and choir teacher from Salt Lake City.

On Sept. 11, 1857, Mormon militiamen led the slaughter of 120 men, women and children on a wagon train bound for California in an incident known as the Mountain Meadows Massacre.

Chief among the instigators was Isaac Haight, a local militia and church leader. Several generations later, Karen Maxwell would come to know of him as her grandfather’s grandfather.

For years, Mormon church officials downplayed the role Mormons played in the mass killing, first blaming Indians and then finding a scapegoat in church member John D. Lee, the only man executed for his role.

Now, a new book drawing on existing material and documents previously unavailable to scholars lays the blame largely on southern Utah church and militia leaders. They were otherwise good people, the authors say, who were caught up in the frenzy of the times and took up guns to try to cover up terrible mistakes. 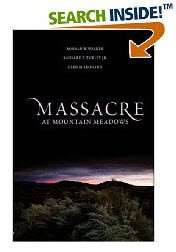 The long-awaited release of “Massacre at Mountain Meadows” forces a reexamination of a dark episode for a faith community that puts families first. Mormons believe the family unit lasts for eternity, dutifully practice genealogy and cherish their pioneer past. So for descendants of massacre perpetrators, the book’s gritty detail and naming of names can bring a painful reckoning.
[…]

The new volume is the work not of Mormon critics but former or current employees of the Church of Jesus Christ of Latter-day Saints, or Mormon church. Among them is assistant church historian Richard Turley, who said church leaders fully endorsed the “no-holds-barred, let-the-chips-fall as they may” approach.

“Our feeling was we just had to face it head on, let people deal with the truth and not with mythology,” Turley said. “I know it’s very uncomfortable, and I’ve gotten a lot of hate mail. People have said, ‘Why peel off the scab?’ It’s because the wound is not healing. It needs major surgery.”

Turley and co-authors Ronald Walker and Glen Leonard relied on hundreds of researchers rifling through archives nationwide, a specialist in 19th century shorthand and newly available accounts from massacre participants from the archives of the First Presidency, the church’s highest governing body.
[…]

The book also delves into the psychology of group violence, concluding that all the ingredients were there, from an atmosphere of authority and obedience to stripping perceived enemies of their humanity.

“From the church’s point of view, (the book) doesn’t try to justify the motives of the people who did the killing,” said Mormon historian Richard Bushman. “It’s always been the tendency in the past to say it was a drastic action, but consider all they’ve been through. This book doesn’t do that. There is nothing this party did or didn’t do to justify the treatment they received. In that sense, it’s an advance.”