You are here: Home | Chuch of Cognizance | Plea could send founders of Marijuana church to prison

The founders of an Arizona church that deifies marijuana have pleaded guilty to two criminal charges and are now each facing up to 20 years in prison.

But Dan and Mary Quaintance, founders of the Church of Cognizance, remain confident that they will not end up behind bars. Although sentencing in federal court is set to take place within the next 75 days, the Quaintances are confident an appeal will keep them out of prison. 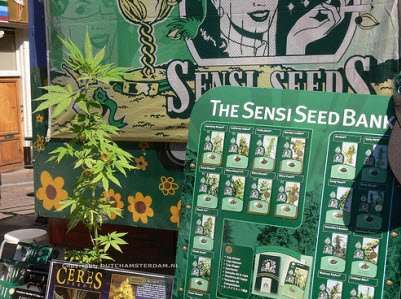 Cannabis seeds, growing guides and equipment sold at a flea market in Amsterdam.

The sentence will depend on the discretion of the judge, said Dan Quaintance’s lawyer, J.D. Herrera .

Dan Quaintance believes freedom of religion will prevail, and predicts the case could go as far as the U.S. Supreme Court.

“It was tough to plead guilty, but really we were just pleading to what we said we did. There is no doubt we had marijuana with us,” he said.

“We think ultimately the courts will see that we are just people using marijuana for our religion. It’s the First Amendment. We think we’ve got a pretty good case.”
[…]

The pair, both in their 50s, had attempted to have the charges against them dismissed on the grounds that marijuana is part of their religion. A U.S. District Court dismissed that appeal, and the Quaintances said that’s why they pleaded guilty — without the religion defense they knew they’d be convicted at trial.

But now that the case has been concluded, the appellate court is expected to re-consider the religious argument.

The Church of Cognizance, which leaders say has “monasteries” in members’ homes nationwide, has this motto: “With good thoughts, good words and good deeds, we honor marijuana: as the teacher, the provider, the protector.”

The Quaintances don’t grow their sacrament but, rather, say they rely on donations of it, which they pick up from church “couriers.” They say that’s what they were about to do when they were arrested.