You are here: Home | Offbeat News | RNB QuickLinks: Mormons or CIA agents? Jesus in a sink, ethical dogs, the hijood and a black mailbox

RNB QuickLinks: a compendium of blurbs and links to, for the most part, religion-related stories you may have missed — be it on purpose or otherwise.

President of the Russian Association of Centers for Religious and Sectarian Studies Professor Alexander Dvorkin is concerned with Mormon activities in the Russian Federation.

“We have been informed that American Mormon missionaries were detained on the territory of secret military facilities more than once. They are accused of having CIA connections, and it is reasonable,” he is quoted as saying by the Komsomolskaya Pravda daily on Thursday.

Who knows. Stranger things have happened. Why, just the other day the Pentagon admitted in an internal report that it wrongly accused an army engineer from Michigan of spying for Israel because he was a Jew.

David Tenenbaum of Southfield is an Orthodox Jew and fluent in Hebrew. The Defense Department put him on paid leave in 1997 while it and the FBI investigated his ties to Israel.

He eventually was cleared of leaking military secrets, but says he has been vindicated by the report.
[…]

“It was well known that Mr. Tenenbaum was Jewish, lived his religious beliefs and by his actions appeared to have a close affinity for Israel,” the Pentagon report, which was released three weeks ago, said. “We believe that Mr. Tenenbaum was subjected to unusual and unwelcome scrutiny because of his faith and ethnic background, a practice that would undoubtedly fit a definition of discrimination.”

In 2000, Tenenbaum filed a lawsuit against the U.S. government, accusing it of employing “Naziesque” surveillance methods against Jews, according to the Detroit Free Press. Tenenbaum, who had sought more than $20 million in damages, said he was the subject of a federal investigation that “literally terrorized” him and his family, according to the Free Press.

OK… ready for some even weirder stuff?

A Mozambican woman recently gave birth to three cups in the southern province of Gaza, independent television channel Stv reported on Thursday, showing images of the crockery. … The Mozambican association of traditional healers (Ametramo) told the station that there was nothing strange about the story. … He said the woman needed to be treated with traditional medicines in order to exorcise the “evil spirits” which made her give birth to the cups.

Robb Keppler says he asked for a sign and he got it, in the form of Jesus in his bathroom sink:

Billboards carrying religious messages may be effective, according to PhillyCoR, the Philadelphia Coalition of Reason, an alliance of humanist, free-thought and atheist groups.

The phrase “Going to the dogs” may soon mean something positive: Dogs have become more intelligent, and even learnt a sense of right and wrong, through spending time with humans, a study shows.

The designer of “burquini” swimwear for Muslim women has come up with a hijab for athletics: the “hijood,” a combination of the words “hijab” or veil and “hood.” 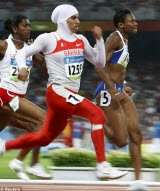 Designed by Aheda Zanetti, managing director of Australian firm Ahiida, the hijood is breathable, fits snuggly like a hood and covers the hair and neck in accordance with Islamic custom.

Retailing for about 65 Australian dollars, the hijood was inspired by Zanetti’s young niece who wears the hijab and who also likes to play netball.

“As I watched her, I wanted to make Muslim women’s lives more comfortable and bring them out of the closet,” she said.
[…]

Zanetti’s desire to make Muslim women fit in led her to design and retail the lycra burqini, a play on the words “burqa” and “bikini.”

The swimwear resembles a diving suit — complete with long sleeves and legs — but isn’t too figure-hugging and comes with a hijab head-covering.

In 2004, Bahrain’s Ruqaya Al Ghasara, a devout Muslim, was the first athlete to ever take part in an Olympics wearing a hijab.

Today, Al Ghasara won her heat of the women’s 200m sprint at the Bird’s Nest stadium – despite being clothed head to foot.
[…]

Known as a Hijood – or hijab combined with a sports hood – the costume was specially designed for Al Ghasara by an Australian sports clothing company.

We listen religious to…

Marian Shanees had never seen the letters of her native language of Aramaic. Now, a new program in Maaloula, one of the few places where Aramaic is still spoken, will change that.

“This is the first time I’m seeing my alphabet,” said 7-year-old Marian, who started learning the language in early July at the Aramaic Language Institute. “I’m really happy to be studying the language of my ancestors.”

Aramaic was the language spoken by Jesus and a Semitic tribe thousands of years ago. Today, it is still spoken in three Syrian villages, Jabaadeen, Serkha and Maaloula – all within an hour’s bus ride of the Syrian capital of Damascus.

In the summer of 2007, the institute, in affiliation with the University of Damascus, opened its doors in Maaloula, the main town where Aramaic is spoken. Now, children and adults who grew up speaking the language can learn to read and write it.

Search for apologetics articles, books, videos, and other research resources across 135 Christian apologetics websites and blogs:

What’s your response to the following: “The Lord be with you.”

If you said, “And also with you,” you’re probably a Catholic who goes to Mass on Sunday.

Not so fast. That response is about to change, along with other familiar parts of the Mass.

Overall, the language in the new English translation, just released by the bishops, is more elevated than before.

As the Wall Street Journal noted earlier this summer, American megachurch pastors are starting up video-based branches overseas to spread their faith, and their faces, to places where evangelical Christianity is just taking hold, using Starbucks as their model for rapid expansion. But here at home, where houses of worship are already as plentiful as suburban strip centers, the same strategy of high-tech franchising is emerging, despite objections from many Christians that it’s the wrong way to reach new converts.

An estimated 2,000 to 2,500 U.S. congregations now operate multiple campuses, and many of them … are so-called video venues. The Leadership Network, a Christian nonprofit that follows these multisite churches, says there will be 30,000 of them within a few years. Already, the most ambitious pastors are predicting that, thanks to video, they’ll have branded outlets nationwide and more than 100,000 followers—twice as large as the country’s biggest megachurch today. Gigachurches are the way that next-generation celebrity evangelists are building their empires.

TIKABOO VALLEY, NEV. — The only landmark for about 40 miles on a barren stretch of highway is a mailbox battered by time and desert gusts. It’s known as the Black Mailbox, though it’s actually a faded white.

Over the years, hundreds of people have converged here in south-central Nevada to photograph the box — the size of a small television, held up by a chipped metal pole. They camp next to it. They try to break into it. They debate its significance, or simply huddle by it for hours, staring into the night. 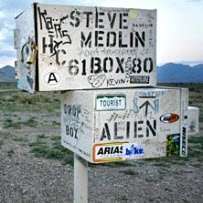 Some think the mailbox is linked to nearby Area 51, a military installation and purported hotbed of extraterrestrial activity. At the very least, they consider the box a prime magnet for flying saucers.

A few visitors have claimed they saw celestial oddities. But most enjoy even uneventful nights at the mailbox, about midway between the towns of Alamo and Rachel. Alien hunters here are surrounded by like-minded — meaning open-minded — company. In a place where the welcome sign to Rachel reads, Humans: 98, Aliens: ?, few roll their eyes at tales of spaceships, military conspiracies and extraterrestrials that abduct and impregnate tourists.
[…]

The owners of the mailbox, Steve and Glenda Medlin, moved in 1973 to a cattle ranch in Tikaboo Valley, about 80 miles north of Las Vegas. There was no talk of aliens, and no home mail delivery.

A few years later, a local tungsten quarry reopened. Some miners moved to a trailer park near the Medlins; it grew into the town of Rachel. Postal carriers began delivery, and the couple put up a common black rural mailbox about six miles from their home, near Highway 375.

In 1989, according to a history of Rachel, a man named Bob Lazar told a Las Vegas television station that he had worked with alien spacecraft at nearby Nellis Air Force Range. He and his buddies, Lazar claimed, also watched saucer test flights in Tikaboo Valley.

So many tourists soon descended on Rachel — on the edge of the valley — that the Rachel Bar & Grill was renamed the Little A’Le’Inn. People would down Alien Burgers and beer there before making their way to the mailbox, the only landmark in Tikaboo Valley. The mailbox acquired a cult-like following.
[…the rest of the story…]