Clueless
Some atheists are upset that they were not invited to take part in the Democratic National Convention’s Aug. 24 interfaith service in Denver.

Becky Hale, a founder of the atheist group Freethinkers of Colorado Springs, said the service discriminates against nonbelieving Democrats. “By reaching out to people of faith,” Hale said, “they have shown the back of their hand to those who do not believe.”

Bibles
In light of the fact that many American Christians are sending their money to televangelists in the hope of getting more money back, support a president who claims to be a follower of Jesus and yet shows by his actions that he is not, or head for Florida (no jokes please) in search of Todd Bentley‘s pandemonium (yes, it means demons everywhere…), we were encouraged by this headline:

American Christians demand their Bibles back

Alas, the article was not about a return to Biblical Christianity, but rather reported that a “group of American Christians who had more than 300 Bibles confiscated by Chinese officials when they arrived in China is refusing to leave the airport until they get the books back.”

Speaking of George Bush and Bibles, a federal appeals court has ruled that East Texas jurors wrongly used a Bible during deliberations in a capital murder case, but that there isn’t enough evidence to show they were prejudiced when they decided to send a Waco man to death row for fatally shooting and bludgeoning a 64-year-old man.

[Satire on] Texas is a state in which almost no serious crime occurs because ‘good’ Christians like George Bush have done their best to hold on to the death penalty.[Satire off]

The death penalty is a barbaric form of punishment banned by most cilivized nations. The records show it does not accomplish what proponents say it does. Hence Texas has to build ever more prisons.

That’s the title of a blog entry at The Australian:

Nothing makes Satan happier than the Beijing “bikini” Olympics says Saudi cleric Muhammad Al-Munajid. In an interview aired on Al-Majd TV on August 10 and translated by the Middle East Media Research Institute, the unhappy cleric slammed the Olympic Games – past and present – for its debauched display of women’s bodies. “The world’s worst display of women’s clothing is the women’s Olympics,” he said. “No exposure of women’s private parts on a global scale could make Satan happier than Olympic games that include women’s sports.”

With Muslims from around the world in the news on an almost daily basis for acts of terrorism, one would think that the cleric would have something better to do than address the subject of women’s athletic wear.

The original suit design was based on surf wear and featured floral Hawaiian print separates: the “Island Shirt” — a looser-fitting version of the rash guard, with more fabric in the chest area and a tapered waist — and swim pants, basically board shorts turned into straight-leg pants. 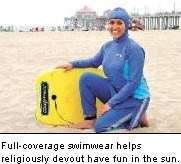 A swim cap and swim hood, similar to what scuba divers might already wear, completed the suit.

“I understand most people are accustomed to not seeing a lot of clothing on the beach or in the water,” said Sabet. “We don’t want to look like freaks or stick out like sore thumbs for being so covered up on the beach but I wanted to help make water activity accessible to Muslim women.”

No word from the Saudi cleric on whether Satan hates the full-body suit.

Those readers familiar with the Gospel of the Flying Spaghetti Monster, revered by the Church of the Subgenius, will no doubt be familiar with the plight of that church’s Reverend Magdalen. Rachel Bevilacqua appears to be a victim of religious discrimination:

The Asterisk Gallery, located in Cleveland, Ohio, is hosting a fund-raiser on Friday, August 29, 2008 for a SubGenius cult minister who acquired over $140,000 in legal costs in her ongoing struggle to regain custody of her son, after the child was taken away from her based on her religious beliefs.

Rachel Bevilacqua is a high-ranking member of the Church of the SubGenius, known far and wide as a “parody religion” that engages in satire, performance art, and comedy in a manner widely seen as a spoof of dangerous religious cults. In December of 2005, she became involved in a legal dispute regarding custody of her ten-year-old son, though she and the father of the boy had never been married. Rachel had raised her son with her husband, Steve Bevilacqua, and exercised custody from birth, with the father of the child retaining visitation rights. As with many separated couples, this agreement had been followed by each parent, until the father took steps to request sole custody of the child in December of 2005.

Domestic custody battles take place daily in the court system, but this case took a turn into strange territory on February 3, 2006, when Rachel Bevilacqua’s chosen religion was introduced in the court room. Her son’s father introduced photos of her performing at the annual SubGenius “X-Day” festival, including participation in an unquestionably adult-oriented parody of Mel Gibson’s blockbuster movie The Passion of the Christ.

If you can’t walk the walk on such issues as human rights and religious freedom, you can always simply talk the talk — as is the case with American when it attempts to strong-arm other nations to toe its line on religious liberty.

We’re all for religious freedom; we just don’t think America has the moral standing to wag its finger at the rest of the world. That said, the Religion Newswriters Foundation offers a page full of resources on

Quote of the Day

We borrow this quote from the Religion blog of the Dallas Morning News:

“In my early teens, I would sit on the street corners and play gospel songs. People would listen, applaud, pat me on the head, and tell me, ‘You’ll be good one day.’ But they never tipped. When I played a blues song, though, they always tipped. Always. That’s when I knew I wanted to play the blues.”

On August 8, 2008 in San Francisco, www.Factnet.org hosted a group of about 25 individuals composed of Anonymous members, Factnet Staff and x scientology members. At the event Factnet did a presentation of its ideas on how to collaborate globally to reform Scientology so that all its victims are given full restitution. Part of this presentation was about how individuals all over the world might taking part in a new super-secure, whistleblower disclosure project on all the criminal, illegal and immoral acts that Scientology has been and is currently involved in. This presentation also contains ideas for numerous educational projects relating to Scientology’s human rights abuses.

In a survey released this summer by the Pew Forum on Religion & Public Life, just 59 percent of 35,000 respondents said they believe in a hell “where people who have led bad lives, and die without being sorry, are eternally punished.”

Skepticism about hell is growing even in evangelical churches and seminaries, says one theologian here, a bastion of conservative evangelicalism.