You are here: Home | Ashura | Man goes on trial accused of encouraging two boys to flog themselves during Muslim ceremony in Britain

A devout Muslim ordered two boys to flog themselves until their backs bled during a religious ceremony, a court has heard.

In a British legal first, Syed Mustafa Zaidi went on trial for child cruelty after allegedly making the pair flagellate themselves with a bladed whip, as part of a ritual that is centuries old. 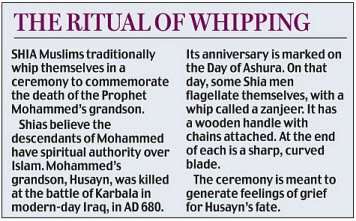 Zaidi, 44, was taking part in the Ashura ceremony, in Manchester, in which Shia Muslims draw blood by flogging themselves with a whip called a zanjeer.

The participants were told that under-16s were barred from taking part under English law. But Zaidi allegedly told two boys, one 13 and the other 15, to flog themselves.

Both required hospital treatment, police were called and Zaidi was arrested.