Seoul – South Korean sect leader Sun Myung Moon was among seven people reported injured when their helicopter burst into flames after an emergency landing north of Seoul Saturday. Moon, 88-year-old founder of the so-called Unification Church, was taken to a nearby hospital owned by his movement, as were the other injured including Moon’s wife Han Hak Ja, Yonhap news agency said.

Moon, 88, was slightly injured in the crash, a hospital official said. Members of Moon’s family, including his wife, were also hurt, and one person suffered a serious back injury, fire official Kim Wu-jong said.

The S-92 helicopter was carrying 16 people, including 13 church members, when it crashed and burst into flames, the transportation ministry said.

Moon and the others were treated at the nearby church-affiliated Cheongshim Hospital in Gapyeong, about 37 miles northeast of Seoul, hospital official Park Sung-kwon said.

Moon received an X-ray and his condition was not serious, Park said.

No details of his injury were given, but the church said in a brief statement on its Web site that Moon and the others were “safe.”
[…]

Moon founded the Seoul-based Unification Church in the 1950s and the conservative Washington Times newspaper in 1982. His church owns hundreds of companies around the world, including the United Press International news agency.

The church’s doctrine is a mixture of Christian, Confucian and traditional Korean values, and Moon’s followers believe he came into the world to complete the work of Jesus Christ.

In 2004, Moon was the center of a coronation ceremony in Washington at which he declared himself the Messiah. He also became widely known for performing mass weddings of followers. 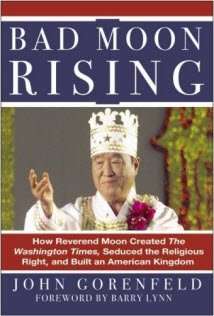 Moon’s Unification Church (which, along with Moon-owned groups and business, goes by countless names) is theologically a cult of Christianity.

Moon considers himself to be the ‘Messiah’ — called, together with his wife, to fulfil what (according to Moon) Jesus failed to do: start the ‘perfect family.’ Moon claims to have the support of, among others, Jesus, Satan, Buddha, and Muhammad.

Sky News (UK) headlined the news about the crash as follows: Moonies ‘Messiah’ Injured In Crash, writing, “The founder of the Moonies movement, who believes himself to be the Messiah, has been injured in a helicopter crash in South Korea.”

Members of the Unification Church for years used to refer to themselves as ‘Moonies’ (followers of founder Sun Myung Moon). Later the movement claimed the term was hateful.