While Islam is marketed as a ‘religion of peace,’ throughout the world Islamists and other Muslim extremists use their religion as an excuse to torture, murder, rape, plunder, and otherwise terrorize others.

One would think this gives Muslims everywhere enough issues to be outraged about. Instead, much energy is spilled over such things as cartoons, films, and teddy bears.

Small wonder that some banks in England and Holland have banned piggy banks so as not to upset Muslims.

Next up: police dogs.

Dundee councillor Mohammed Asif said: ‘My concern was that it’s not welcomed by all communities, with the dog on the cards.

‘It was probably a waste of resources going to these communities.

‘They (the police) should have understood. Since then, the police have explained that it was an oversight on their part, and that if they’d seen it was going to cause upset they wouldn’t have done it.’
[…] 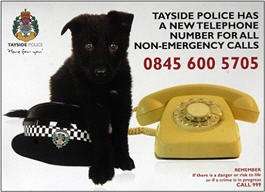 Cards featuring police dog-in-training Rebel have been distributed to communities throughout the area to advertise the single number point of contact for non-emergency calls to the police.
[…]

‘His incredible world-wide popularity – he has attracted record visitor numbers to our website – led us to believe Rebel could play a starring role in the promotion of our non-emergency number.

‘We did not seek advice from the force’s diversity adviser prior to publishing and distributing the postcards. That was an oversight and we apologise for any offence caused.’

By its very nature, Islam makes it extremely difficult for Muslims to integrate. Islam means submission, and the Quran makes it clear that Muslims expect non-Muslims to submit to Islam. Western values are not compatible with Islam.

In many countries of the world, dogs are considered pets. Muslims will have to accept this fact and learn to live with it.