You are here: Home | Egypt | A prayer bump causes division amongst Muslims in Egypt

Signs of division on Egypt’s brow

Cairo, Egypt — The zebiba used to be the mark of an elderly Muslim man, the fruit of a lifetime’s devotion, but it is increasingly seen on the faces of young Egyptians.

Literally meaning “a raisin”, the zebiba is a patch of hardened skin where the forehead touches the ground during Muslim prayers.

Some welcome the trend as a sign of devotion, others say it is ostentatious piety.

Worse still there are fears public displays of faith like the zebiba and the hijab, or headscarf, are spilling over into vigilantism. 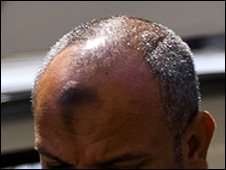 In recent years the zebiba has become a pronounced mark on foreheads.
Source: BBC

Liberals or Christians who don’t conform in the workplace or on the street say they are being harassed.

A practising Muslim’s forehead is meant to touch the ground at least 34 times a day – in symbolic submission to God’s will – which could add up to more than a million prostrations in a lifetime.

But over the past few decades, as more and more Egyptians turned to religion, the zebiba began appearing among young men as the veil did among young women.

But not every Muslim gets one, and opinions vary as to where it comes from. It could something to do with skin-type, or created artificially, or come from particular kinds of matting. Others believe it is a gift from God.

Many young Egyptians I asked believe some kind of light will emanate from the prayer mark on their foreheads on the Day of Judgment, marking them out as truly devout.
[…]

Dalia Ziada of the American Islamic Congress – an non-governmental organisation based in Cairo – says some men deliberately pray on straw mats, and rub their foreheads until they eventually develop the zebiba.

One of Islam’s aims is to eventually bring the entire world into submission to Islam (the very word means ‘submission’). While not all Muslims concern themselves with this goal, those who do are referred to as Islamists. Islamism is sometimes called “political Islam.”

The press does not always make the (right) distinction between Islamists — those who attempt to reach their goal by peaceful, legal means — and radical Islamists — Muslims who are ready to use any means, including illegal ones such as terrorism, to bring about submission to Islam. For instance the BBC article, continued below, refers to Egyptian politician Magdi Hussein as a “radical Islamist,” while ‘Islamist’ would by itself would be the correct qualification.

The increased public display of religious devotion is part of a wider phenomenon, affecting what women wear, and what people read or watch on their television screens.

The relentless rise of political Islam over the past few decades has succeed in rolling back significant parts of Egypt’s secular tradition.

For radical Islamist politicians, like Magdi Hussein, that is a move in the right direction, away from the Westernisation which started over two centuries ago with the French and British invasions.

He sees the the zebiba phenomenon in the context of government-inspired “darwasha”, an atmosphere of unpolitical religious devotion which goes against the Islamists’ self-professed aim of reforming society and fighting corruption and despotism.

But Mr Hussein refuses to acknowledge that the increased public display of piety has had any downsides.

Egyptian women and Liberals I spoke to tell a different story. A Coptic doctor, who did not want to be named, told me she had been spat upon in broad daylight for not wearing the veil.

A young Muslim engineer, Shahinaz, who refuses to cover her hair, said she has become scared of intimidation.

“I was driving home one evening and had to stop next to a girls’ school. Suddenly the girls – all of whom were veiled – surrounded the car and start banging on the windows and screaming: ‘Infidel! Apostate!’ I was terrified.”

Dr Sayyed al-Qimni, one of Egypt’s best known liberal writers and historians, says society has been hijacked by a very conservative brand of religion, which he characterises as Saudi Wahhabi Islam.

There is no doubt that in one way the Islamists are winning their struggle to increase the role religion plays in social life and public debate in this country.

The question now for Egypt is what kind of Muslim society it is going to be – one that is at peace or at war with modern values.`

There was a similar, but more extensive article in the International Herald Tribune late last year:

But the zebibah is primarily a phenomenon of Egypt. Muslim men pray throughout the Arab world. Indeed, Egyptian women pray, but few of them end up with a prayer bump. So why do so many Egyptian men press so hard when they pray?

“If we just take it for what it is, then it means that people are praying a lot,” said Gamal al-Ghitani, editor in chief of the newspaper Akhbar El Yom. “But there is a kind of statement in it. Sometimes as a personal statement to announce that he is a conservative Muslim and sometimes as a way of outbidding others by showing them that he is more religious or to say that they should be like him.”
[…]

In much of the Arab world, symbols of extreme observance are fairly standard and tend to stem from the conservative religious cultures of Gulf nations, like Saudi Arabia. There is the long beard. In extreme cases men wear a loose-fitting robe that stops at their ankles, just as the prophet Muhammad wore his own gown at ankle length.

Those symbols have seeped their way into Egypt, and are growing in popularity. More and more women, for example, are covering their faces with a niqab, a black mask of cloth that has come to Egypt from the Gulf. The zebibah, however, is 100 percent Egyptian, and does not carry the negative connotation of imported symbols.

Men with long beards can still find it hard to get a job. The zebibah, on the other hand, can open doors. “The zebibah can help,” said Ahmed Mohsen, 35, a messenger for a law firm whose own mark was pinkish, bumpy and peeling. “It can lead to a kind of initial acceptance between people.”

There are no statistics on the zebibah’s prevalence. But today, perhaps more than any other time in recent history, Egyptians are eager to demonstrate to one another just how religious they are.
[…]

Not everyone has a zebibah. Plenty of Egyptians still regard their faith as a personal matter. But the pressure is growing, as religion becomes the focus of individual identity, and the most easily accessible source of pride and dignity for all social and economic classes.